Note: Horace DeJarnett passed away July 24, 2013. Although he was battling terminal cancer, his wife reports that he died of a stroke.

Horace DeJarnett about himself:

"All of my pipes are carved from the finest quality Algerian briar I can find. I coat each bowl with a special pre-carb treatment which speeds up the break-in process. After the third bowl, it will smoke as if it had been in your collection for years. I get a lot of positive feed-back on this feature. 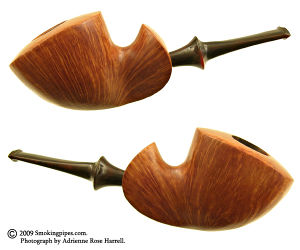 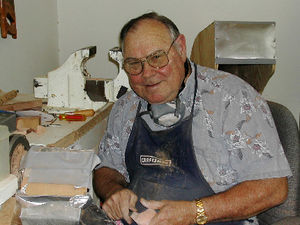 Standard draft holes are 5/32". I think that's too small and many pipe smokers agree with me. So I drill mine to 3/16" for a better draw. You won't have to send my pipes out to a pipe repairman to have them opened up, as many do.

For over 40 years I worked in the grocery industry. In 1984 I founded my own food brokerage business. It prospered and grew into a multi-state corporation. In 1999 I sold my portion of the business and retired.

Due to health concerns and public scrutiny, I quit smoking cigarettes in 1993 and took up the pipe.

(I believed then – and still do – that health risks are greatly reduced by not inhaling and just puffing.) Serious pipe-smoking is conducive to day-dreaming, and thus the idea of making my own pipes became a quest. 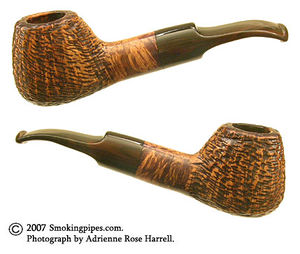 I was fortunate to study under Andrew Kovacs, a well-known carver in Northern Arizona (trade name “Jandrew”) for about a year, off and on. I learned a lot of the basics from Andy, but some of my best counsel came via long telephone conversations with Mark Tinsky.

Over the years I have made and sold approximately 1,000 pipes, most of them here in the United States, but I do have customers in Indonesia, Germany, Japan, England, Israel, Canada, and Thailand.

What began as a hobby has become my passion. I lost my leg in 2001 due to a blood clot, so fortunately for me, I have an occupation that is “handicap friendly”.