See the Talk:Dino_da_Campione for an Italian version of this article, and we will soon have one in Espanyol... 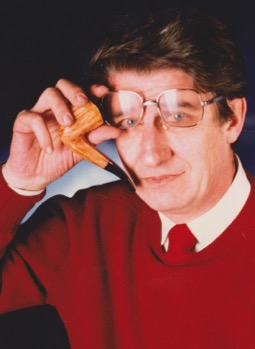 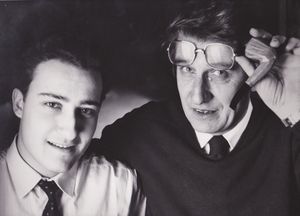 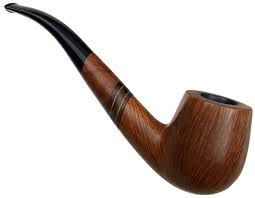 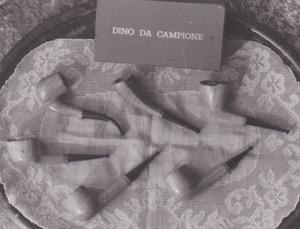 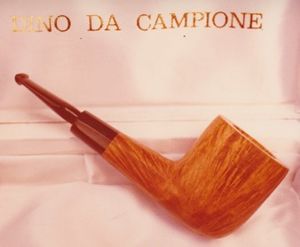 Dino da Campione named Leonardo Airaghi born in Milan (1929 - 2010) was a great interpreter in pipes of handicrafted manufacture, and considered by many: “ The Chanpion of the Italian handmade pipe”. His production began in 1969.

Having descended from famous artists, among them: Tomaso Airaghi 1827-1899 and Giovan Battista Airaghi (1803-1855) and Leonardo Airaghi 1871-1900, Leonardo was provided a wonderful heritage for making pipes with unique artistic heritage at their foundation.

Each pipe was carved according to the grain of the briar; each pipe was born from its own nature, but always with classic form, elegant and balanced. Pipes were always polished with natural wax, rustication was rare, pipes with briar defects were abandoned.

Pipes were often made with flat surfaces on the bottom of the bowl and a little foot on the mouthpiece in bone or briarwood in order for it to stand. They were also designed to maintain continual combustion, avoiding the loss of embers from the chamber, which facilitated outdoor use. Meticulous attention to the draft hole was realized by developing particular techniques to insure consistent execution.

When customers ordered they ordered a “Dino da Campione”, not a Bulldog or a Billiard. Just a few small indications were accepted; even when the surprise was great, the client fell in love with the details of their special one of kind “Dino”.

Unlike many craftsmen, who, since the mid-1990s have grown up and developed throughout Italy, Dino da Campione has represented a unicum for "elegance", originality of details and product quality”.

Presidents of multinational corporations, nobility, politicians, successful business clients, men of strong personality and character all sought Dino at his official workplace (Casino di Campione Manager), to talk to him and commission a special one of a kind pipe, and considered themselves very lucky for the experience (Perhaps they will also try the casino!) From Switzerland he sent pipes to: Florida, Brazil, Venezuela, New York, Delaware, Singapore, Dubai, and Korea. His concern: "that the pipe should never break". And so he tested prototypes to discover areas that could break accidentally in the client's homes. To this end he would toss the pipes against the laboratory wall, often with a disastrous results. But finally, in the last technical evolution he developed with his son Cesare, the mouthpieces and the pipe could stand the test!

Dino was anti-marketing par excellence, so it was the editorialist of: "Friends of the Pipa"; by making numerous articles always countercurrent and original.

Production was always limited to a hobby by having other activities of family origin. The commercial distribution in Italy were almost exclusively through Novelli in Rome, which for a long time remained the only distributor even when there was a very limited number of pieces available.

Every “Dino” demanded a very important implementation time, here because the production was limited, but it is a guarantee that each piece with the original stamp was made by his own hands.

In addition to the "Dino da Campione" mark, the nomenclature might include an “oval” with the initials AP , standing for "Absolutely Perfect". This was reserved for pipes without the slightest trace of briarwood impurities. In addition a variable number of up to 4 "Snails", which, like the stars of the hotels, identified the pipe's personal ranking. The special denomination "QUEEN" was reserved for pieces he considered extraordinary, and had fallen in love with.

The private laboratory, still untouched in Switzerland, reveals the details of how many original pipes have been created, and their various characteristics, such as horn ring, silver or gold snail with coral, stand up leg, 5 piece unbreakable mouthpiece, metal ring on top of the chamber, etc.

His twenty-five year collaboration with his son Cesare Airaghi, who in 1980 undertook the career of designer, even in root products, has developed the technique of the diagonal anti-breaking mouthpiece, of which very few specimens are known: pipe and mouthpiece integrate perfectly, achieving not only beautiful aesthetics, but absolute cohesion, making it almost impossible to break through an accidental fall!

Dino continued indulging his passion to make pipes until 2005, but after 1999 they were reserved for the family.

Production data per year are the following: