Dominic Cazzetta created his fine Don-Lou pipes on Bath Avenue in the Bensonhurst section of Brooklyn, NY. His passing in the early 1990s has made them increasingly rare and collectible. 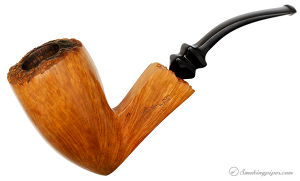 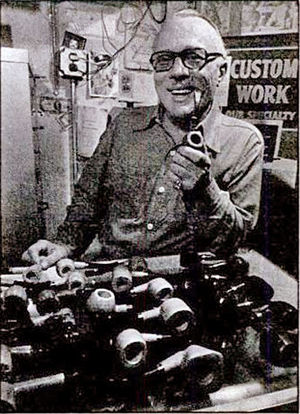 Tom Mistetta, a friend and collector notes “On one of my days off during the week, I would usually spend several hours at the shop talking with him. During these visits, I learned a great deal about the different types and styles of pipes and the materials they were made from. Don used primarily the finest grade Corsican briar, but I also saw him create pipes from exotic woods such as maple, cherry, walnut paduuk, bubinga, zebrawood, and rosewood He even taught me how to put the finishing touches on new pipes and how to blend tobacco. "To know the man was to love the man. His shop was quite small and six people crowded it. On Saturdays, the shop was more like a social club with customers and friends standing inside and out shooting the breeze. These people were serious pipe smokers and collectors. Some owned more than a hundred of Don's creations and they cherished every one of them. My brother remembers a reporter from New York magazine visited one Saturday, and interviewed Don and some customers. Don’s artistry was cherished by knowledgeable smokers and even in the 1970s some of his sets went for as high as $10,000.00”.

All of the Don-Lou pipes are made of fine briar without fills, naturally finished and displaying mostly straight or the very tightest of flame grain.

Mike Mistretta, Tom's brother, was able to locate the New York Magazine article about Don-Lou. I quote it below along with a link to the website where appears a photo of Dominic Cazzetta.

“Ninety-Five percent of the pipes you buy are stained, shellacked and varnished. Not mine” exults Don Cazetta. “Mine are all natural…Greek or Corsican plateau briar, fiddleback maple (as sweet as sugar no matter what you smoke”), Oregon oak (“spicy”) or Brazillian Rosewood (“hypnotic…it’s the sap in the wood”). Don has been in the pipe line for 45 years, ever since he left his job Bernarr McFadden’s stockroom and went to work in a little shop across the street from his home in Williamsburg. The shop was run by Jobey, (“the Master of Pipes”) who gave him 25 cents an hour to stain and strip putty. From there he went on to stardom as the fastest “rougher” in the business with Kaywoodie, Medico and DeMuth (“the College of Pipes’). He had, until then, smoked cigars and cigarettes, “but it was strictly pipes at this stage of the game.” It is still. Don recommends pipes not only because he hand makes them, but because “they are healthy, they relax you and a pipe is a distinguished looking article”. (They run from $7.50 for a plain briar to $150.00 for one adorned with an Indian or a cobra). He also blends his own tobaccos ($3.25 - $3.50 a half pound) and his shop, a neighborhood hangout as cordial as a candy store, smells almost as sweet. The name of the place is Don-Lou. Who’s Lou? “My son. He’s 34, a bus driver. He knows a lot about pipes, but I’m not ready to put him in here. Then what would I do? This is a one-man operation”. Don-Lou Pipe Shop 2058 Bath Avenue Brooklyn/266-9630