Edward’s pipes were originally produced in Saint-Claude, France when Francais actually was a world-class pipe maker with longstanding business & political connections to Colonial Algeria that allowed them to obtain the finest briar. 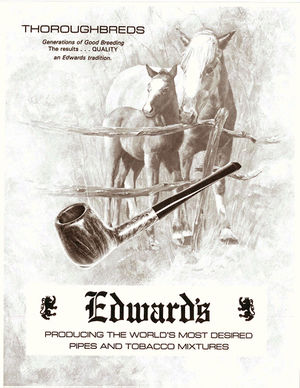 During the tumultuous 1960's, Edward’s created a business model to offer the finest briar available in both Classic and Freehand shapes - all at a fair price. They bought the company & equipment and cornered the market on the finest, choice Algerian Briar just before the supply vanished in political turmoil of Algeria's independence. Edward’s packed up both machinery and briar-treasure to America, safely caching the essentials to create a new pipe-making dynasty. This was a coup, for the 70’s and 80’s were grim years for pipe smokers as quality briar all but disappeared.

Edward's Design Philosophy is hard to pin down, think of their style as the "American Charatan" with unique & clever twists all their own. Today, they fashion pipes in several locations across the USA. All of Edward's pipes are Algerian Briar - a fact very few pipe companies can claim, and all are oil-cured utilizing natural finishes - no strange concoctions are used to interfere in your tastebud’s dance with the briar. Algerian, Calabrian, Sardinian, Corsican - take your pick, but Algerian Briar is generally considered the finest smoking briar ever used. When combined with oil-curing, Algerian takes on a magical quality that even Alfred Dunhill recognized as far back as 1918 as the choice for both his Bruyere and Shell.

www.otcpipes.com has a nice collection of vintage Edward's pipes along with scans of Edward's catalogs.