Gustave Fischer was pipe maker for "The House of Fischer', which was located in Orchard Park, NY, near Buffalo. 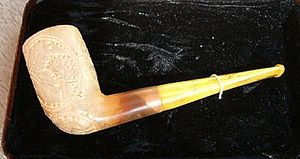 The Fischer family apparently made pipes for six generations, starting in Germany and continuing in the United States until the 1970s. Their literature from 1956 said that all their briars were bench made. They also made meerschaums, but some confusion is caused by the fact that there was also Gustav Fischer, who made meerschaum pipes in Boston during roughly the same period.

The following information is gleaned from a thread on PipesMazaine.com

PIPES BY THE HOUSE OF FISCHER, ORCHARD PARK NY
Fischer pipes were made in USA through the 1950's up to late 1978 when the owner, Paul Fischer retired, sold the store and moved to Florida in 1978. Unfortunately The House of Fischer did not use a date stamp on their pipes, and therefore it is not possible to determine the exact date of manufacture.

The Fischer shop in Buffalo closed in the late 1950’s last run by Arthur Fischer who moved shop to his home in Orchard Park. Arthur was the last of the family and retired 1978. Early pipes made in shop in Buffalo were stamped Buffalo in loop below name. Art deleted this from the stamp in early on 1960’s which helps in partial dating. Art did only pipe repair and sales. An unconfirmed report from a pipe maker Milton Kalnitz from the same era stated that the later pipe may have been made by Weber. Paul Fisher was part of the unrelated family in Boston Mass. The Buffalo shop started about 1890,s. Source of info was personal contact with family.