From Pipedia
(Redirected from Frank Axmacher)
Jump to: navigation, search 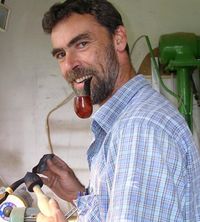 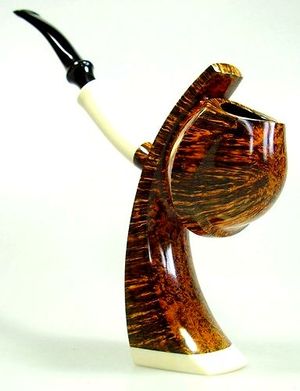 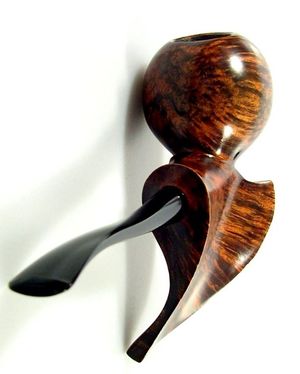 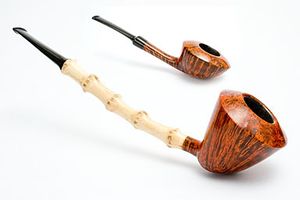 Frank Axmacher is a member of the "new generation" of German pipemakers who want to make their long-standing passion for the profession since the international breakthrough of the first "young lion" Cornelius Mänz about 5 years ago.

For about one and a half years he has employed himself intensively in pipe making. His proper profession is that of stonemason and sculptor. For that reason, he has a very good background in design and technical skills and possesses patience and meticulousness. He has acquired his knowledge for pipemaking predominantly as an autodidact(self-taught) and increased his knowledge during several "workshops" with Bertram Safferling. Later, he was invited to work together with the famous carvers Rainer Barbi and Tom Eltang. In the meantime (2007) he has made great progress towards beautiful shapes of his own and also final finishing.

After his first attempts, which were characterised by stylistic experiments in all possible directions, which is often to be observed, Frank has gained a considerable reputation in the meantime. His current pipes are very attractive, partly along clear, strict lines (e.g. very attractive Vulcanos) partly of sweeping elegance. Frank has obtained astonishingly beautiful Briar. The stems, handcut predominantly from Ebonite or Cumberland, stand out due to clean processing and a pleasant bite. In the meantime, Frank incorporates beautiful precious materials like horn and mammoth ivory, and he observes how these materials enhance the beauty of a pipe. Frank himself is highly impressed with the outstanding pipes of Kei'Ichi Gotoh.

The pipes are delivered in a beautiful leather bag. The signature of the pipemaker, as well as an outline of the pipe, are printed on the bag. A very nice idea!

Since 2004 Frank Axmacher has had an affair with "Lady Briar". The fact that his learned craft is that of a stonemason and sculptor helped him a lot in this task, because in this way he was already familiar with the many problems and solutions in sculpting. in his first days of pipemaking, he refined his craft during several stays at Bertram Safferling's workshop.

Frank's pipes are made completely by hand, from the best plateaux briar and vulcanite/ebonite rod stock. He has evaluated acrylic, too; he occasionally uses it as stem material, but only in cases where it shows advantages for stylistic reasons. Stem and shank treatments made of acrylic, horn and different woods may occur, too.

Frank's work clearly shows his enthusiasm for shapes and lines. So it comes as no surprise that his pipes often show sharp, nevertheless flowing, lines and clear geometrical design elements. The surfaces and the finish of his pipes and his stem work are top notch. 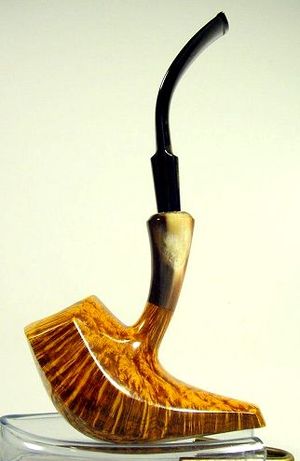 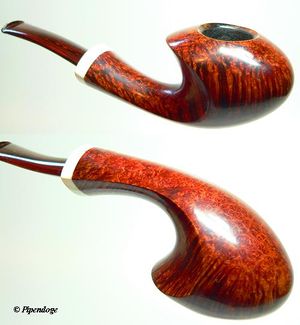 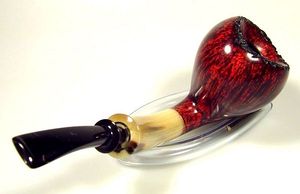 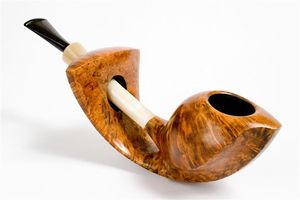 A few facts about the man behind the pipes:

Sketching lessons by Jan Boomers (Solingen, Germany) from 1976 until 1982

Married, father of a daughter since 1986

Since 1988 stonemason was his main employment

Attended several stages in wood-sculpting between 1993 and 1997

Editor's Note: After reviewing the beautiful pipe sculptures that Frank Axmacher has produced, there is no doubt in my mind that the Student has become the Master. As both an artist and an artisan in this pipe making world of miniature sculptures, he certainly ranks among the top Pipemakers in the world.