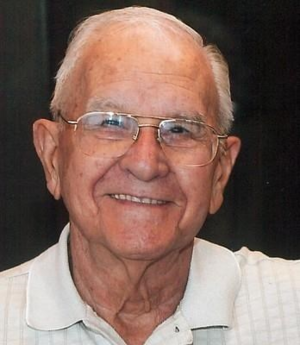 Bill passed away April 17, 2016, in Mountain Home, Arkansas at the age of 92. He was born September 1, 1923, in Scottsbluff, Nebraska, the son of William and Beulah (Koenig) Fuerst. He married Lorene Senne on August 6, 1946, at Greene, Iowa and ended his career as a Marketing Manager for Illinois Bell. Bill was a U.S. Army veteran of WWII, earning the rank of First Lieutenant and serving in the Signal Corp throughout the Pacific theatre. He lived in Mountain Home since 1980, moving from Villa Park, Illinois. Bill was a volunteer for Hospice of the Ozarks for over 20 years, also volunteering for the American Cancer Society. He was a master woodcarver, who loved to fly fish and golf. Bill was an Eagle Scout and a longtime Scoutmaster of Troop 62 in Villa Park, Illinois. 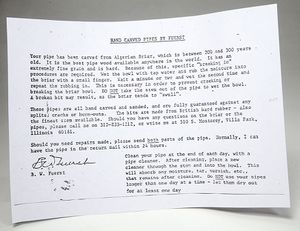 On the half-sheet Bill states the following: “Your pipe has been carved from Algerian Briar, which is between 200 and 300 years old. It is the best pipe wood available anywhere in the world. It has an extremely fine grain and is hard.; The bits are made from British hard rubber – also the finest stem available.”

Eagle Scout, First Lieutenant of the US Signal Corp in the Pacific, and longtime Scoutmaster. According to his son Bob, he made pipes for the Cellini pipe company. Not much more is known about the years producing pipes, or the pipes made for Cellini Pipe Company. The following pipes have been dated from 1979 to the late 1980’s I’m very grateful to Bill’s Son Bob who provided additional information and his generosity in purchasing Mr. Fuerst’s pipes. Following photo credits are to Bob. I will add additional photos and detailed photos as time permits