A. Garfinkel Inc. was a celebrated Washington, D.C. importer and retailer of pipes, tobaccos and cigars. The founder was Arnold Garfinkel (1903-1988). Arnold was originally from Germany, and the family had already been in the tobacco trade for two generations before he was born; his father sold tobacco to Kaiser Wilhelm in Berlin. Fleeing Nazi Germany in 1938, Arnold soon settled in the District of Columbia; in 1940 he established his first tobacco shop there, although it closed a few years later during the Second World War. 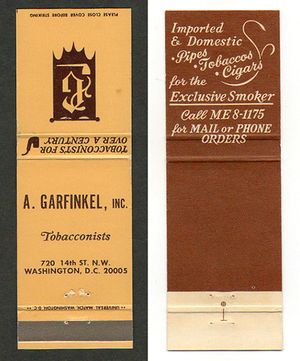 It wasn't until July of 1960 that Arnold established A. Garfinkel. Originally located at 720 14th Street, N.W., in April of 1980 the shop advertised its move to 1585 Eye Street, N.W. The new location of was a block from Lafayette Square and not much further from the White House. In 1972, author Hugh Sidey wrote in Newsweek that while interviewing then President Richard M. Nixon he spotted some pipes and a tin of Garfinkel tobacco on Nixon's desk.

Among aficionados the shop remains well known to this day for the imported tobacco blends sold under its own name; these were manufactured by Robert McConnell and Sobranie. In addition custom blending was done for customers both domestic and foreign, with Arnold sometimes using recipes he had brought with him from Europe. A. Garfinkel carried pipes under its own name as well; these too were apparently manufactured elsewhere. Pipes were stamped A. Garfinkel, Wash D.C.; some are marked Algerian Briar and others simply Imported Briar. Many appear to be Made in France. Finally, A. Garfinkel was renowned for its selection of cigars.

In 1940 Arnold married Esther Kolker. One of their four children, Larry, was managing A. Garfinkel by May of 1980 and eventually took over sole responsibility for running the shop. Notwithstanding Arnold remained active at A. Garfinkel throughout his life, with son Larry noting that "He had a great personality and a great smile...and a very good head for business."

A victim of declining demand reflecting both increased pressures on smokers and changing tastes, A. Garfinkel shut its doors in the summer of 1992.