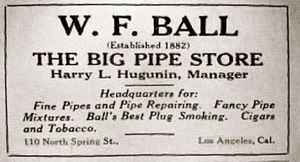 Hugunin's was a tobacconist once located in Los Angeles, California. I see in the LA Times on March 11, 1916 a listing the Harry L. Hugunin filed to do business at 110 N. Spring St. I also see an ad from Dec. 1918 in The Grizzly Bear publication, under the name “W.F. Ball, THE BIG PIPE STORE, Fine Pipes and Pipe Repairing. Fancy Pipe Mixtures, Ball’s Best Plug Smoking, Cigars and Tobacco”. The firm was established in 1882 and operated until at least the late 1940s.