From the J&J Pipes Website: John Klose and Jared Coles make pipes in the same workshop, from the same materials, using the same methods. This is not what makes J&J pipes great. Greatness happens because every detail, crack and crevice is judged by two critical minds. 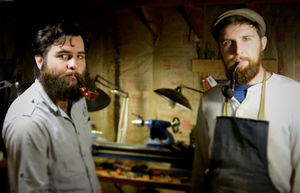 John Klose and Jared Coles, from the J&J Pipes Website 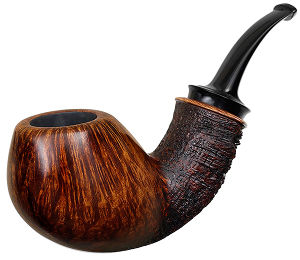 Greatness happens because of the united aesthetic. An aesthetic which embraces the old world traditions rooted in the English pipes of the early 20th century, celebrates the grace and technique of the Danes, and embraces the freedom from symmetry of the Japanese school. When you see a pipe that speaks to you, you’re in good company: two people already adore it.

John and Jared live near Yosemite, CA, one of the most visually arresting places on the planet. There is something more powerful about Yosemite than its size and beauty, it does something to the soul: it causes wonder. It is this sense of wonder that led John and Jared into the world of pipemaking, seeking to create and reflect the transcendent beauty that surrounds them.

John grew up outside of Albuquerque, New Mexico, and moved to the foothills between Yosemite and Sequoia National Parks during grade school. He attended Sierra high school in Auberry, CA. He received his first pipe at the age of 12 as a costume prop, and when he turned 18, was primed to become a full-fledged pipe smoker. All through college and university he worked in the mountains around Yosemite at a camp, where he used his boy scout experience to become a jack-of-all-trades; climbing, spelunking, auto mechanics, beer drinking, woodworking, leather working, and of course, pipesmoking. After graduating from Fresno Pacific University with a degree in communications, he worked in video production, while pursuing his passion for pipe making along with Jared.

Jared grew up in the orange groves of the eastern San Joaquin Valley. He was homeschooled through high school, after which he attended College of the Sequoias and University of California at Irvine, graduating with a degree in economics. During his time in Orange County, he started to dabble in pipe making and he found it to be quite addictive, luckily without too much detriment to his studies. After he graduated, he got married and moved to San Diego while his wife finished school at UCSD. He contacted Jeff Gracik of J. Alan pipes and was able to witness the making of a truly high grade pipe. When he moved back to the Central Sierras of California, he took this knowledge and passion with him, and J&J Artisan Pipes began.

Every J&J pipe comes with a certificate that is signed, stamped, and dated by both of us. It also has a handwritten description on the back of the card, with detailed information about the pipe. We stand behind our product, and we want you to know.

Editor's Note:Starting in January of 2016, Jared and John are working on pipes separately in order to pursue their own unique styles. They are still friends, and at least for now, share the same workshop.