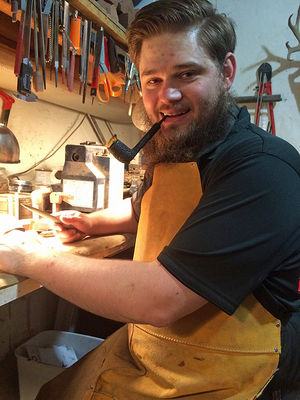 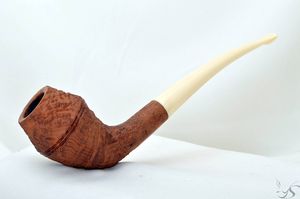 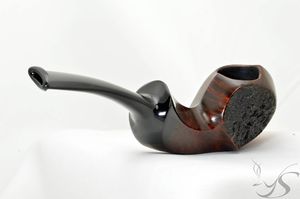 
While most pipe makers start off with a pipe kit, I had a different path. I had just started smoking a pipe and thought I’d save a few bucks and have a nicer pipe than a factory pipe and pay less for it if I made one for myself. I bought a block of briar and a stem blank and used whatever tools I had on hand to make holes in it for smoking. I enjoyed making a briar pipe so much, I bought another, and another. Then I started acquiring tools specific to pipe making. I never used a pre-drilled kit.

A few months after I started making them for myself, I was talking to a local tobacconist. When he found out I made pipes, he asked me to bring it in. He offered to buy it from me and I realized that I might actually be able to sell some of my pipes.

I heard about the Chicago pipe show and went to ask for critique from some of the best makers and found out I wasn’t quite as good as I had thought. I came back from the show humbled and driven to make my pipes better. For the next several months, I made as many billiard-type shapes as I could at the advice from several makers. I also joined the Pipe Makers Forum and read everything I could find on how to make great pipes.

I asked Walt Cannoy if he would be willing to offer honest critique of my pipes. He assigned me the making of a billiard. After his first critique and many conversations, he guided me into understanding the foundations of aesthetics in shaping and finishing, providing much practical advice on tooling in the process. I considered the next Chicago show to be a great success and received a lot of positive feedback from both collectors and pipe makers.

My pipe making journey is by no means complete. I still learn new things with almost every pipe I make. I am now striving to find my own voice and master the fundamentals of pipe making.

My goal in pipe making is to create a high-quality smoking instrument that will be timeless in beauty and function. In short, a pipe to hand down to your children. This is why I have chosen my grading system.