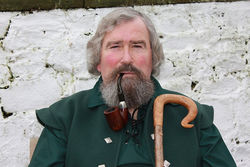 As a very brief introduction to you the reader of these Pipe Chronicles, my name is Jim Lilley. I am a retired Gentleman of Celtic origin, currently residing in Scotland,United Kingdom.

I am both a smoker and collector of the Peterson brand of Pipes. To say I am driven by my obsession for Peterson pipes would be an understatement. Particularly with reference to it's origins and it's history. It was the lack of any real historical literary references that encouraged me to start developing these 'Peterson Pipe Chronicles' for Pipedia. This work ,of which I am extremely proud, is not yet finished ,as I see it is a constant 'work in progress'.

I would encourage those who may not have read it, to do so. Particularly if you are new to the world of Peterson. I would like to think of this humble work as a guide, to particularly new smokers and those who may be considering collecting them.

Following years of smoking and collecting a variety of well known mainstream and artisan pipe brands. I decided to concentrate solely on collecting the Peterson brand.
I just naturally, and comfortably migrated to them. Like me they were of Celtic origin. My ancestors having drifted over from Ireland to Scotland in the early 1800's.
I found them to have an affinity with my expectation for quality and value, in their honest simplicity and reasonable pricing. Equally they are not gaudy or pretentious, handsomely classic in appearance and most of all, they smoke well.

My initial Peterson 'apprenticeship' was forged in acquiring a smooth 314 system and a 'Baskerville' Sherlock Holmes. My positive learning experience with both of these led to acquiring various others.
In time 'I reviewed the situation' ,so to speak and took the decision to apply a more systematic approach to my burgeoning collection of random Peterson pipes.
I now channel my energies into maintaining, several mini Peterson sub collections to help maintain order from the chaos. I find this necessary, given the huge selection of series that Peterson have and are still producing.
My main collection of around 300- 400 Peterson pipes, now consists of the following sub groupings. including Patents, pre-Republics,Sherlock Holmes, Mark Twain's, Darwin's, Peterson London made pipes,'Star' and 'Red' Standard Systems, Year pipes, Anniversary, Commemorative and modern higher grade pipes.
I am now most definitely a serious collector of the brand and distinguish between my considerable number of dedicated smoking rotation pipes and those which are purely collectables and remain un-smoked and in pristine Museum condition.

I hope this brief insight gives you a taste what contributed to my current Peterson affliction and that you enjoyed the 'crack' and blarney from an old Scot's Pete Nut!