An innovative system pipe, the "Jima" (for export also known under the name "Garland" and to a lesser extent in the Netherlands) was a pipe with a silver-plated or gold-plated steel metal frame, connecting a plastic mouthpiece to a plastic outer shell that housed the pipe bowl. This plastic pipe came in a few different colors, black and ivory being the most popular and later various mottled pastel shades showing depressing sales. 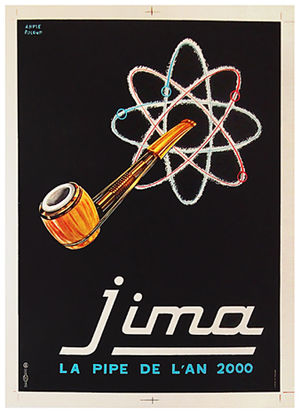 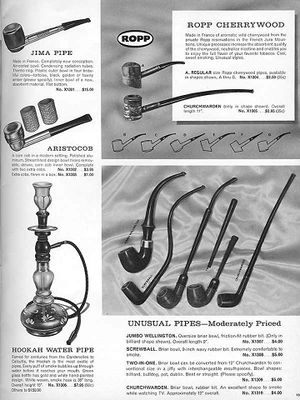 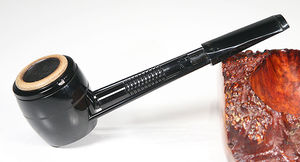 While the housing was made of hard plastic, the bowl proper was made of a pressed white clay which has been mistaken for meerschaum or sepiolite. The bowl was made detachable by using a screw in fitting which could be loosened or tightened using an Allen key. The fittings on both the bowl and evaporator (stinger) used a plastic compression gasket to keep tar and moisture from seeping out and air from leaking in.

The "Jima" was equipped with an innovative filter design previously unemployed which made it an unforgettable part of the system pipe revolution that began in 1880 with the increasing popularity of new, moist aromatic tobaccos. In the "Jima" was found a filter which was made of spiral wound (sometimes double wound) "electrostatic" metal wire dubbed the "filtres serpentins helicoidaux". It was said that the electrostatic properties of this filter caused the tars and residues to cling more readily to the filter medium. It is more likely that the extreme turbulence produced by this system caused particles of tar to fall and moisture to condensate as the smoke cooled rapidly. In this instance the evaporator worked to great effect relative to the amount of tar and moisture which accumulated in the stem.

To access the filter, the stem (plastic and in other iterations metal) can be unscrewed, by use of a spring system, or simply slid back, tilted downward and finally pulled off. In nearly every instance the words "Breveté France & Etranger" or "Modèle Deposé Made in France" can be found on the underside of the mouthpiece near the stem.

French brand created in the 1960s by Mayeux, which had a very modern look. This modern look was emphasized by the manufacturer in the promotion material. The slogan speaks of "la pipe de l'an 2000" or "The pipe of the year 2000" . The factory was sold to Chapel Frés, which became part of the Berrod-Regad group in 1987. The Jima pipe is no longer made.