This article is a work in progress. We are attempting to consolidate information from several different sources as time allows, but it is a bit of a jumble at present. Please feel free to dive in and clean it up!' --sethile (talk) 10:04, 14 October 2017 (CDT)

Jost's was a beloved pipe shop in the St. Louis area. It's proprietor was Mrs. Henry A. Jost. She was a pipe smoker.

The following information is from Classicpipeshop.blogspot.com: 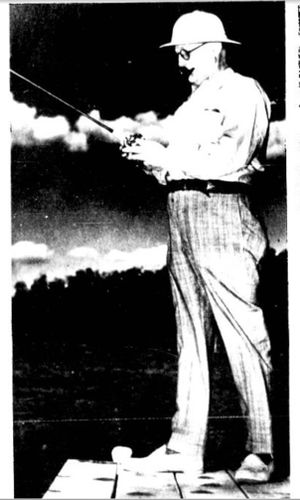 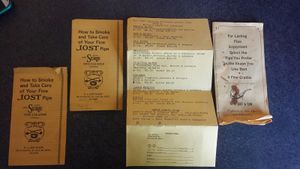 The source of the picture of Jost fishing, is from the July 18 1937 issue of the Milwaukee Journal. The caption is missing, but here's a transcription:

"What the well-dressed fishermen [sic] wears, including, and one might say especially, the hat and shoes, is shown by H. J. (Duke) Jost, St. Louis pipe manufacturer, just before going out on Planting Ground lake, one of the Three Lakes waters."

Bio: (supplied by jguss - Thank you!)

Henry is listed in the St Louis city directories by 1899 as a turner (and the 1900 census likewise describes him as a wood turner), but within a few years he is listed as a seller of umbrellas. The actual date he began his business is unclear; different sources give different dates, but almost all of them are from things published many years after the fact. One newspaper article from 1939 says Henry opened shop in 1892; Adah’s obituary, on the other hand, states that Henry opened his business in 1905, and that canes as well as umbrellas were sold. Certainly canes, umbrellas, and pipes all involved the turning of wood, and there is separate evidence that Henry learned these skills in Germany before coming to America.

Note: Jost's sold walking sticks / canes through the 70s at least from accounts of shop patrons.

The precise date the shop open is probably impossible to ascertain, and in part depends on what we mean by a shop. In all likelihood Henry worked for someone else before starting his own business; moreover the business clearly evolved over the years, changing both location and merchandise. At any rate, by 1909 Henry is listed in the St Louis city directory under umbrellas (sorry for the pun) at 1424 S Broadway; it is only in 1914 that his listing is expanded to cover umbrellas and pipes, and in that year a second address is included at 110 N 6th. In 1916 the listing is still for both umbrellas and pipes, but the Broadway address is now gone, with only the 110 N 6th address remaining. By 1921 the umbrellas are dropped for good, and Jost’s listing only mentions pipes. Jost stayed at 110 N 6th through 1933, but by 1936 (there's a couple year gap in the directories in the source I consulted) the business appears at 208 N 6th; moreover it is now listed as “H J Jost & Son”, presumably not just reflecting Henry’s advanced age (63), but his son Louis’s maturity at age 35. The business stays at the 208 N 6th address for most if not all of its remaining history.

Mrs. Henry Jost 1954-1970s (although it looks like Raspberry ran the shop from 1960-) (see Adah Jost entry below - for further clarification)

Presumably took over the shop after her late-husband's death. Tagged as a woman pipe smoker she seems to have worked well with Harvey Raspberry for the remainder of her career at Jost. She passed on management of the operation to Harvey Raspberry in or around 1960.

"She and Harvey Raspberry give lessons in the shop. There are two comfortable chairs in the corner of the shop where a smoker can sit and have his smoking progress checked under the watchful eyes of Mrs. Jost or pipemaker Raspberry."

It is my belief SHE is the Mrs. Henry Jost mentioned above based on dates and not Henry's wife, Julia. Julia passed away in 1932 and Henry never remarried. Adah was Louis' wife and she is confirmed to have worked at the Jost shop with Henry.

Note that the directories list Adah as manager by 1955 (Henry died the prior year, and Louis was long dead). Fortunately we’re not entirely dependent on an incomplete run of city directories; in fact Adah’s obituary states that upon her husband Louis’s death in 1940, she became a co-owner of the pipe shop along with her father-in-law "Duke" (i.e. Henry). After his death in 1954 she became sole owner, and continued to operate the business until 1988, just three years before her death.

Sometime after 1940, widow Adah remarried to a musician named August L. Fantilli (b. in Queens, NY on February 15, 1906, died in St Louis, MO on May 15, 1979). Whether or not this affected her involvement in the shop is unclear, but I infer not since she continues to figure prominently in newspaper articles and oral recollections for many, many years to come.

In the 1930 census Harvey, age 15, was still living in Arkansas; he had moved to Missouri by the early thirties, and in the 1940 census was listed as a clerk in a pipe store. According to his obituary Harvey retired in 1984, some four years before Adah closed the business. Assuming the pipe shop he was working at in 1940 was the one belonging to Henry Jost, Harvey was with the same business over 44 years.

Harvey managed the shop from roughly 1960 through its closing in 1983. Examples of his pipes were very unique from its carvings to odd / natural characteristics in the briar (ex. Plateau tops to knobby shanks, etc). These pipes stand out in a crowd and are excellent pieces if you can find them. There are no discerning marks and the pipes are quite a bit different than standard or Comoy house pipes offered throughout Jost Pipe Shop's history.

Bio from a Raspberry / Rufus Family Reunion program: Harvey Newell Raspberry was born in Harmony Grove Community which is near Camden, AR. However, his family moved to Pine Bluff where he received his formal education at Catholic Elementary and the public school of Pine Bluff, AR. He lives in St. Louis, MO with his wife, Vivian DeShield. Harvey is a pipe smoking builder and managed Jost Pipe Shop more than 25 years. He retired in 1984 as a Real Estate Broker. The Harvey Rasperries’ hobbies are fishing, playing bridge and pinochle. He is a member of the A.M.E. Church and is a member of the trustee board. Harvey was one of the initiators of the First Raspberry and Rufus Family Reunion.

Note: Based on discussions I've had with Jon (provider of mountains of useful info!) the term "manager" might be loosely used based on the reports from Raspberry family members. It's perfectly conceivable Harvey ran the shop from time-to-time. The title "Manager" will stay based on his experience and interaction with the customers. There is no mention of Ownership in any way.

Mrs. Jost referred to her deceased husband with a reverence when discussing "pipe" opinions. The shop was not large, by Iwan Ries standards, but it had a charm and old world character. Harvey Raspberry was always so cordial and assisted with sales as well as making pipe repairs. Harvey was also an avid bridge player and had attained his Master status. The team of Mrs. Jost and Harvey was low key but successful with encouraging their clients' enjoyment of pipe smoking. They had a knack for remembering their clients' preferences for pipe styles and grades, and tobacco preferences. As I recall, they only sold their own blends of tobacco which were offered as Jost's Virginia, Jost's Deluxe and Jost's Old English. I don't recall the years nor the exact addresses, but I believe their shop that I first visited was closed and moved to a new location sometime in the 1960s. The original shop was in a building which was to be demolished and the new shop was nearby on the street perimeter (street level) of the Famous-Barr Department store (a division of Macy's).

"The Eclectic Shopper," a round-up of shopping columns published in the P-D in the early '70s; it's full of descriptions of the milliners and watch repairmen who plied their trade in the city 30-odd years ago. Here's an excerpt from the "Pipes" chapter: "Mrs. Henry A. Jost, proprietor of Jost's Pipe and Tobacco Shop, is one of the 60,000 American women who smoke pipes. Mrs. Jost believes that that many men and women pipe smokers don't know how to smoke a pipe - 'even if they have smoked for 35 years.' She and Harvey Raspberry give lessons in the shop. There are two comfortable chairs in the corner of the shop where a smoker can sit and have his smoking progress checked under the watchful eyes of Mrs. Jost or pipemaker Raspberry."

The shops last location was at 6th and Olive under the spiral ramp for the Famous and Barr parking lot. The shops wall were lined with glass display cases for pipes. There was a regulator clock on the wall that ticked with a rhythm that reminded you that pipes were to be smoked patiently and slowly. One of their best selling tobaccos was Old Virgina. A wonderful unique lacey ribbon cut virginia with latakia. Courtesy of the the Jost's in Saint Louis thread on pipesmagazine.com