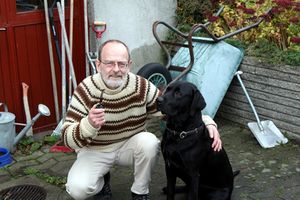 The following information is from the excellent book, Scandanavian Pipemakers, by Jan Andersson

Karsten Tarp was born in 1953 in Kolding, Jutland, the town where Viggo Nielsen founded the Bari pipe factory in 1948. Bari was Karten's first work, and he stayed with Bari for 10 years. This is where he met his friend, Kai Nielsen, who he now shares shop space with in Faaborg. While the two share their work space, they are independent pipe makers. Each making their own pipes from start to finish.

Karsten's pipes run from classical shapes to more daring freehands. He uses ebonite, cumberland, and occasionally horn for his stem work. Horn is a difficult material for stems, and is only used on straight pipes. He may be the only pipemaker in Denmark using horn for stems. One of Karsten's more unusual shapes is called the Kronen or Crown, and it is cut mainly with a knife. He has made that shape for over 30 years, but perhaps fewer than 15 of them over those years.

Some exclusive pipes like the Crown are not included in Tarp's grading system. For the others, the grades are denoted by the names of ships from the Viking age: Draker, Skuder, Snigge, and Batr. With Draker being the highest. He makes about 200 pipes a year, some of them with adornments of silver, horn, and boxwood. He makes some with 9mm filters. He has taken part in pipes shows in China, which is a growing market for his pipes, as well as in Russia, and the U.S.