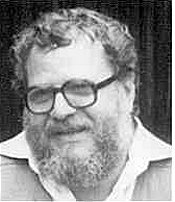 Sven Knudsen, elder brother of Teddy Knudsen, is without a doubt, one of the most important and influential of the early Danish freehand pipemakers.

Poul Rasmussen, who was hardly more than an apprentice at the time, and still being instructed in pipemaking by Sixten Ivarsson, who for his part was about to leave and join Poul Nielsen (→ Stanwell), introduced him to the famous Suhr's Pibemageri (pipe workshop) in 1956. Sven Knudsen, as all the others too, started with repairing pipes. But revealing enormous talent, dedication, and diligence, soon proceeded to make complete pipes on his own. And all too soon a considerable share of responsibility for the workshop was placed on his shoulders because Poul Rasmussen was not only an exceptionally gifted pipemaker, but also a very worldly and gregarious man who left the workbench often enough to join some jovial company for a nice chat and a glass of beer. So Sven Knudsen ended up designing many of the shapes and carving many of the pipes subsequently identified with and credited to Rasmussen. At Suhr's, he hired and trained Hans Jonny Nielsen, who later became famous under his nickname Former. (They remained friends for the rest of Sven's life.)

In 1959 Sven had had enough of the unfavorable situation with Rasmussen and left. He then furnished a small workshop of his own in Copenhagen and began to work on his own. He sold his pipes to some of the most prestigious Copenhagen P&T shops such as W.Ø. Larsen, Poul Olsen (of "My Own Blend" fame) and Pibe-Dan. The house catalogs featured his pipes prominently for many years. From the Pibe-Dan catalog 1961/1962:

Furthermore he was contacted by Svend Bang, Ole Larsen's Store manager and right-hand man, who offered him a position as workshop foreman at the newly established W.Ø. Larsen workshop. BTW, Ole Larsen, the proprietor, and Sven Knudsen became very close friends. Under the aegis of Sven Knudsen W.Ø. Larsen pipes became one of the bedrocks of the Danish freehands!

Four years later, in 1963, he decided to move to the countryside. So he closed his Copenhagen workshop and resigned from Larsen after he had urgently ensured that Former Nielsen succeeded him as workshop manager at W.Ø. Larsen. In Tappernoje, a hamlet belonging to the small town of Præstoe on the Island of Fyn, he bought a house and established an all-new workshop. There he lived from 1963 - 1973. 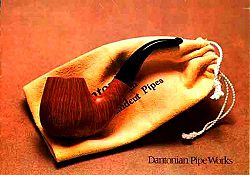 In 1970 Teddy Knudsen had taken leave from Anne Julie tired of making highgrade pipes but being paid as gofer. His elder brother invited him to join together at Sven's place in Tappernoje. They agreed to work together and started a project they called "Dantonian PipeWorks". They selected a compilation of pipes and in early 1971 they published the Dantonian PipeWorks Catalog worldwide. In English only, because the brothers orientated to the export markets in Germany, the United States, and particularly in Japan. The pipes were made to order both for customers and retailers.

The catalog portrayed a carefully balanced selection of models. Some Sven had developed and refined earlier when he was at Suhr's Pibemageri and later when working for W.Ø. Larsen and Pibe-Dan. Shapes like the "Walrus" or the "Swan" had already earned him a considerable reputation, and yet others that were newly sketched now. Teddy also added some of his own designs.

The pipes, stamped "Dantonian - Handicraft of Copenhagen", became very popular and a considerable success in sale. But even though the fraternal company broke apart after ca. 2½ years. Teddy left in early 1973 to pursue his own way. Sven Knudsen moved to Næstved in southern Sealand where he continued to make pipes under the Dantonian name for some years.

Sixten Ivarsson, who cherished Sven's work very much, introduced Sven's pipes to his Japanese business friends and customers. Hence no wonder-- thanks to Sixten's personal recommendation and due to their outstanding quality Sven's pipes quickly became very popular in Japan. Very popular? It would be much better to call it an enormous hype. As Sven's daughter Marianne later reported, her parents' house in the countryside was beleaguered by Japanese customers who would come to stay in the country for weeks at a time, some of them living in a large caravan next to the house while waiting patiently for her father to get some pipes finished. They used up all the hot water from the heater, taking long baths every day. Watching all the usual habits of the Japanese way of life like eating raw fish and seaweed must surely have been a very odd sight in the eyes of a young Danish girl at those times. Sven's daughter now visits Japan when possible, as she later became a big fan of Japanese art, food, books, movies etc....Thanks to the early introduction by her fathers Japanese friends and customers.

From 1973 to 1997 Sven Knudsen was considered one of the best pipe artisans worldwide and continued to make his highly praised pipes, which were mainly sold directly to private customers and a few selected traders. 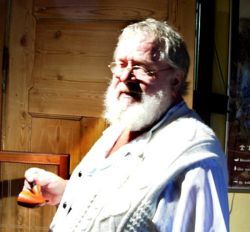 Sven had suffered from health issues before (diabetes). But in 1997, things got worse. The diabetes caused an onset of severe neuritis and peripheral neuropathy, a very painful disease impairing his dexterity significantly. This forced him to close his workshop for official business. 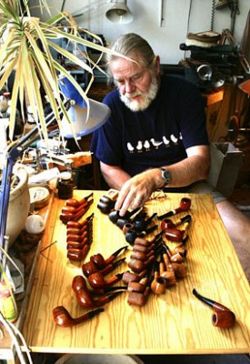 Having retired from active pipe making, Sven fell into a degree of obscurity, to the point where few collectors knew of his work, much less his pivotal role in the development of the Danish pipe. When Sam Goldberger of finepipes.com was visiting Denmark in 2003, at the suggestion of Lars Kiel of Danishpipemakers.com he asked Teddy about his older brother, and was given an introduction. He visited Sven at his house, took pictures of some of his remaining pipes, and then sold many (7 or 8 acc. to Sven's wife Margit) of them at cost on his website. Subsequently, Teddy picked up the last group of pipes from Sven's workshop, finished and stamped them, and Goldberger again offered them to his customers at cost. (Some of Sven's pipes can sometimes be found on ebay.com).

Sven Knudsen stamped his pipes "S. Knudsen" and with a logo depicting the head of an ancient Corsican wearing a bandeau. This was also a hint to the origin of his briar he personally selected from the saw-mill. A grading was not used but of course - Who told such nonsense? - he used more than one color to stain his pipes!

It might be something of a secret, but Sven was a gifted artist in other media. His pencil drawings were very true to life and his oil paintings exuberant with colour. He made beautiful necklaces from natural materials such as amber, bone, wood and even on occasion claws. These he made for his adoring daughter, wife and mother in law. In his youth he had been a keen hunter and marksman. He was able to use the trophies from these trips in his art, for example making sculptures of trolls and animals.

Sven was generous and helpful. He would spend weeks helping friends in their workshops or in setting up new businesses. He did this out of the kindness of his heart and never looked for any reward. Whatever the personal cost, Sven could never say ‘no’ to someone in need. It is ironic that he died suddenly on November 25th 2010 from a massive tumour next to this great heart.

Thanks to Samuel Goldberger of Finepipes.com for the use of his materials in the development of this article.