Kai's father Viggo Nielsen has given many Danish pipe makers their first taste of working with briar through the years, including his son, Kai. 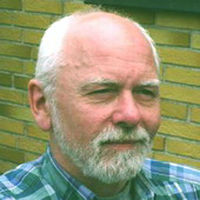 Kai Nielsen, was born in 1951 in Vordingorg, and is Viggo's eldest son. When he was a teenager, Kai worked for "pocket money" at the Bari pipe factory. At this time, the Bari factory was owned in part by Viggo Nielsen who started it in 1948 in Kolding, Jutland. In 1972, at the age of 21, Kai began working full time at the factory. The factory was sold in 1975 and shortly after, Viggo, Kai, and Jørgen Nielsen (Kai's younger brother) joined forces and began making pipes together, known as the Faaborg pipe. Kai studied and learned the "art of pipe making" under the careful eye of his father, Viggo. Kai's hard work and love for the craft was evident in each pipe he made. His designs and skills were soon noticed and admired by many. The three worked together, but sales were difficult at times and Kai and his brother had to take outside jobs at several points during the years. 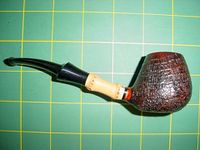 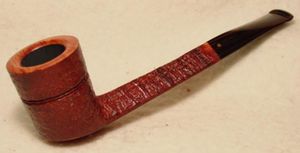 Eventually, Kai and Viggo worked together in a studio located on the island of Fyn, until Viggo died. This is where Kai continues on his own. Jorgen is making pipes in his own studio. Kai, like his father before, selects only the finest aged briar, most of which is Corsican. He also air cures the briar for a number of years to provide exceptional smoking qualities. Kai's handcut acrylic and cumberland mouthpieces are works of art. His attention to detail and creative designs are overwhelming.

Kai's pipes developed a reputation, first in Germany, and then in Japan and US, where he attended the Chicago pipe show. He is now making 300 - 400 pipes a year. Germany being his first market, many of his pipes have the 9mm filters popular there. Kai still makes filter pipes, but fewer now that his market has expanded to other countries, and they have even become increasingly popular in Germany in recent years. The size range varies a lot, with the smaller pipes tending to be more popular in Japan, and the larger in the US and Germany.

Kai's very best pipes are called The Jewels of Denmark, and are graded seperately form A-D with A being the highest grade. The filter pipes are graded A, B, C, and D and the non-filter pipes get one to four V's. This way he never has to seperate a stem from a pipe to see if it has a filter. Kai uses Ebonite, Cumberland, and occasionally acrylic for his stems.

Kai's workshop in a large house and located in a beautiful rural district on the outskirts of Faaborg. Since Viggo died, he know shares the space with his old friend form the Bari Factory, Karsten Tarp.

A good deal of the information above is from the excellent book, Scandanavian Pipemakers, by Jan Andersson


Many in North America will see a similarity between Kai's style and that of the highly regarded carver Kurt Balleby. For good reason - Balleby apprenticed under Kai Nielsen when he was learning the art of pipe carving.