Henrik Olsen was born in 1963. He was a trained auto mechanic and later a technician at TDC. He was happy in this work, but following an accident in 2001, he retired in February 2004. He had a lot of time available, but due to the accident, he could not continue the hobbies he had enjoyed before and had to find something new. 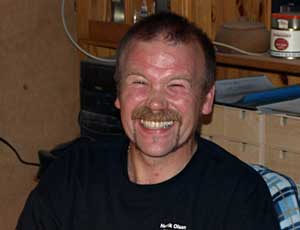 Henrik first smoked a pipe in 1988, but when he became a father for the first time, he discovered pipe smoking was not conducive to parenting and he gave it up for a time. After retiring he thought having something to do like pipe smoking would be helpful, so he drove over to see Lars Vig Norup who made ​​a pipe for him, and started smoking again. Lars also showed him his workshop and talked about how to make pipes. That started the idea of ​​becoming a pipe maker.

As he smoked his new pipe and pondered life he became more and more convinced that he would like to be a pipe maker. He has often been teased about his perfectionist tendencies and this was no exception. The planning took a great deal of time. In the process he looked at many websites and the work of many pipe makers. He read books on how to make pipes and finally decided to make a pipe making workshop, mostly just as something to do. But it it soon went well beyond that. The workshop space came together, thanks to the support of family and many wonderful friends who chipped in to help. From breaking out the old floor in the stable, to pouring the new floor, to installing the ceiling and walls, etc.. It was a great adventure and while he would have liked to have done it all himself, it would have been impossible without all the help!

Finally, in the fall of 2004, he planned a trip to Copenhagen to see look at equipment and other machinery and visit various shops. They started the tour with Gundel and Bergstrom where he bought different sanding discs, sandpaper, wax, and various supplies, not even being sure what he needed. After the trip to Gundel and Bergstrom went on to Thurmann who had a workshop in Copenhagen. There they toured both the business and the workshop, and had a nice chat about pipes. Finally, they visited the workshop of Tom Eltang, where the real adventure finally began.

Tom Eltang welcomed Henrik with open arms, like he had many other want-to-be pipe makers before him. After hearing he wanted to learn how to make pipes he was given a complete tour of the workshop and a thorough introduction to pipe making. Driving home hours later was surreal for Henrik and his wife, Tine. They had made a workshop but until then had no real idea how to make a pipe. Now after visiting with Eltang, Henrik knew it would not only be possible to make pipes, but that we would do it. It had been a fantastic day!

The pipe workshop was completely finished and equipped in January of 2006, and he then finally made his first pipe. It was hard, and while it was not the finest pipe, he new each pipe after it would get better.

Olsen's character has always been to work for precision and perfectionism rather than speed. And he has always enjoyed working with tools that work well for special purposes, and and are well maintained. Becoming a pipe maker and facing these new challenges were now helping him to grow again, and giving him new purpose in life after having to set aside the previous work he enjoyed. Suddenly it was possible to have work he could enjoy and apply himself at home where he lives. He could come and go as he pleased. He is still always in pain, and some days are worse than others. Some days he is in too much paing to enjoy time his workshop, but there are also good days where he can, and on those days, the potential seems endless.

Henrik gravitates toward more classic shapes in small and medium sizes. The pipes are stamped Olsen Denmark, and so far he has no grading system. He does his blasting in Tom Eltang's workshop.