Graham Searjeant has provided the following research indicating we had incorrectly associated Ross Arundel pipes with the Arundel, a sub-brand of Sasieni. 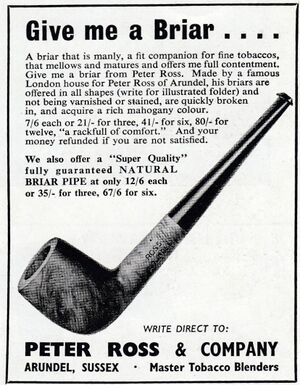 Over the years I have accumulated nine of these pipes and come to doubt that Pipedia's description of Ross Arundel as a Sasieni sub-brand/second was adequate. I was driven to investigate by my latest purchase whose seller ( far more knowledgeable than me) echoed my feeling that the pipes did not all come from a single maker.

The Arundel was one of Sasieni's principle marques in America but this is nothing to [do] with Ross Arundel. This was the own brand of Peter Ross, a mail-order retailer. According to his own advertisements, Peter Ross quit the City of London ( where he was probably in the tobacco trade rather than finance ) some time in the years following WW2, to set up a tobacconist shop in Arundel, a very small but beautiful city in Sussex, about 50 miles South of London. He blended his own mixtures. From the mid 1950s he started selling them, and later pipes and cigars, by mail order, first through ads in local papers and then nationally, targeting country people without access to a good tobacconist.

A 1960 Country Life ad for his pipes says: "Made by a famous London House for Peter Ross of Arundel, his briars are offered in all shapes and, not being stained or varnished , are quickly broken in and acquire a rich mahogany colour". The famous London house is clearly not Sasieni, which apart from no connexion of shapes and numbers, was for historical reasons, not a name known to the average UK pipesmmoker. It is clearly ORLIK.

I have checked my 9 pipes plus 4 currently on offer from the same seller. Of this13 sample, 5 exactly match the shapes and numbers on the Orlik Shape Chart so valuably preserved on Pipedia. A further three match Orlik shapes and character but are not numbered, so "probably" Orlik. Of the remaining 5 one, an unusual and distinctive design medium bulldog numbered 18, is almost certainly from Charatan's Ben Wade. (a larger verson, No 22 was sold as a Bewlays). The other 4 are not Orlik or Sasieni but I have yet to identify them.

Peter Ross continued in business well into the 1990s. In 1980 Orlik was merged with Comoy's under Cadogan Investments but the arrangement seems to have continued for a while. Several Ross Arundels have twin-bore stems, which are often associated with Comoy's. One has a clearly original Comoys Everyman stem (which prompted my search). Ross may have looked elsewhere when the Orlik range was severely slashed.

Sorry for this long-winded explanation. In short one might say:

Far more interesting than "long-winded" to most of us reading Pipedia. Hopefully Graham will send us photo examples from his Ross Arundel collection at some point.