Sociedade Rovera was created in 1911 in Varese, Italy by Federico, Carlo, Cornelio and Francesco Rovera. The company was in turn taken over by Angelo Rovera, Francesco's son, who in turn with his own son Dorelio created the brand Ardor. They also produce Angelo pipes, which are a less expensive brand. 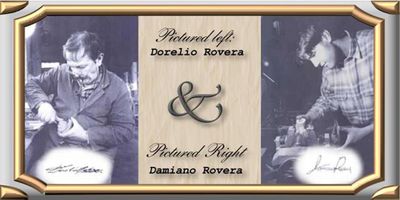 The brand is now carried on by Damiano Rovera, son to Dorelio. The Rovera family is truly the first family of Italian pipe making. Aside from the Ardor pipes now produced and the Roverart pipes made by the same company, the Rovera family has produced Fe.Ro pipes, beginning in 1949, Massimilliano Rovera & C. SNC., which produced the Mario Rovera pipes, Linea Erre S.N.C. di Rovera G, created in 1936 and now producing only face and body products, Gardesana Pipe Di Fiorenzo Rovera E.C. S.N.C., started by Fiorenzo Rovera and which has also made the Carey Magic Inch pipes for years, as well as the Hugo International Series, or H.I.S. pipes, at one point sold in Dr. Grabow catalogs, and many others. The Dr. Grabow Omega line of pipes grew out of a copy of a Rovera pipe. In 1934 Giorgio Rovera, along with Angelo and Adele Bianchi, founded Gigi, still in business today. It would be impossible to understate this family's importance in the world of pipe making and pipe smoking.