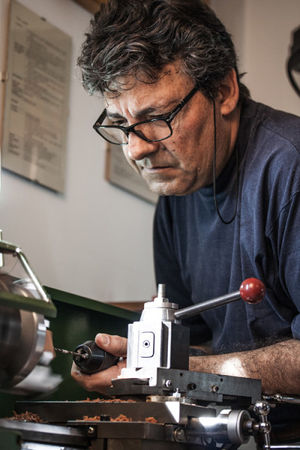 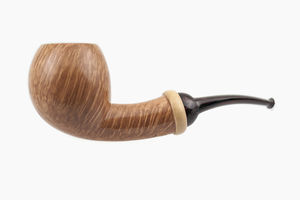 I was born in 1959 and my first pipe I smoked 14 years. I wanted to emulate the myth of Sherlock Holmes, whose show was broadcast on television, then a monster in black and white that was beginning to reap the first victims.

I discovered the warm feeling to hold on to an object of polished wood mirror from which sprang smells evocative of faraway lands.

I stopped early (too inconvenient, and then, at that age, myths change quickly), but the attraction to this extraordinary matter is that the wood is not abandoned me.

For example, I was fascinated by building bridges and elevations in chestnut poles during summer camp with the Scouts.

Years later, to grow, even in winter my passion for the sea, I began to build ship models. Leudi, frigates, and sloops xebecs (never tried with the Victory , just too much for me) appeared in my house sharing the limited space with books.

Then, as happens to everyone, it's time to think about how to earn my bread. Degree in agricultural sciences 5 years of research at the University of Palermo on my other passion, wine, and finally the intake at the regional administration as agricultural adviser. Today I work at the observatory for plant diseases in Palermo and I divide between the laboratory and the disclosure.

The desire to build my first pipe arose when I decided to start smoking it, in 2009 Why not try? - I told myself.

I found a man who stimulated me to continue, dear Charles Riggio , owner of one of the oldest tobacco shops of Palermo and even now the point of reference for pipe smokers Palermo. The apprenticeship began by consulting books on the subject, video on you tube and tightened against Carlo, always generous with advice.

Then, one day, Charles told me, she is no longer a hobbyist. Go to a teacher and make a quantum leap, it has all the numbers. It was from this that I contacted stimulus Mimmo Romeo , the happy beginning of this wonderful adventure. Mimmo saw my pipe via e-mail and had no qualms about telling me that they were very poor. I was not discouraged, and this, perhaps, convinced him to meet me in his laboratory. At that time I also contacted the late Guido Guidi, a friend of Charles Riggio, unfortunately at the end of his days on this earth. There was a chance to know him, so I reduced my trip to the only laboratory Mimmo.

Today I consider Mimmo and his wife Karin my teachers and sincere friends. My productions are focused on the techniques learned working with them, my style, apart from the choice not to use the shared color, is constantly evolving and I hope they can inspire in the viewer a clear identity.