The Legend of Dr. Grabow

Written October, 2005, by Paul W. Grabow, and courtesy of DrGrabow-pipe-info.com 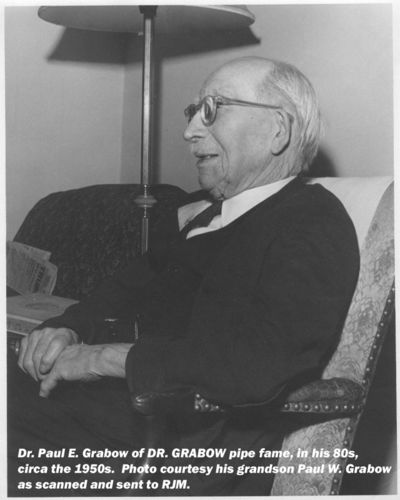 Dr. Grabow Pipes are named after Dr. Paul E. Grabow (my deceased Grandfather), a general-practitioner physician formerly with an office on the northeast corner of Fullerton and Halsted in Chicago. His youngest son was Mr. Milford P. Grabow (my Uncle) who passed away January, 2005 in Chicago. Dr. Grabow's other son (my Father, deceased in 1979) was Dr. William S. Grabow, a dentist who practiced in Chicago and Evanston, IL.

Milford Grabow recently recounted details of the Dr. Grabow Pipe legend in a letter to me as follows:

"To start from the beginning, the old homestead was on 2348 Seminary Ave. (Chicago) before the De Paul University bought and tore down the whole area to expand the campus. Three doors north on 2400 Seminary Ave. (corner of Fullerton) was Brown's Drug Store, one of the old fashion community Drug stores that was popular of that area and was owned by Brown the Druggist. It had the usual ice cream counter and wire chairs and tables to serve sodas and sundaes. My Father became fast friends with his fishing buddy the Druggist. Most every weeknight after dinner while Mom did the dishes, Pop would visit Mr. Brown in the back room of the store and they would have weighty discussions about world events, fishing, politics, sports, etc. while smoking their pipes. One block west on Fullerton on the corner of Racine was the large pipe factory owned by Mr. Linkman. Mr. Linkman, when he wasn't too busy, would join the other two in their bull sessions and the three became fast friends.

It was during one of their nightly sessions that Mr. Linkman mentioned that he was coming out with a new pipe containing some innovated improvements and was looking for a name for it. He thought if it contained a Doctor's name it would probably sell well so he asked my Father if he would mind if he could use the Dr. Grabow name as he liked the sound of it. My Father liked the idea and was flattered to have a pipe named after him. So Mr. Linkman used the Dr. Grabow name without any formal agreement but just a "friendly understanding."

As a child in the 1940's and 1950's, I remember how Grandpa loved to smoke his Dr. Grabow pipes. The pipes were generously provided to him at no cost by Mr. Linkman, apparently part of the friendly understanding. Dr. Paul E. Grabow died of natural causes in 1965 at the ripe age of 97. He had a very rich and full life and I believe pipe smoking was good to him. Through the years I've enjoyed watching the growth of the Dr. Grabow Pipes and sharing Grandpa's legend with the curious.

Anyone personally familiar with additional details of this legend is requested to forward input to the undersigned.