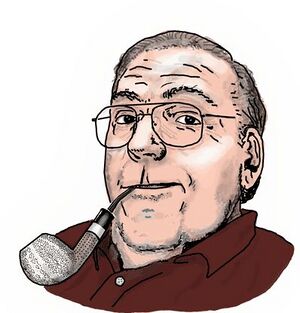 In our last episode, I took a look at Billiards including the Pot, the Stack, the Panel Billiard and the Four-Square. There is another group of shapes related to the Billiard that we’ll look at this time: the Long Shanks. The Long Shanks (my name for the group, by the way) include the Canadian, the Liverpool, the Lumberman and the Lovat.

The classic straight Billiard features a shank that is roughly equal in length to the height of the bowl. Give a Billiard a shorter shank and a short stem and you’ve got the aptly named “Nosewarmer.” Many decades ago, a creative pipe maker with a cooperative chunk of briar decided to make a longer shank and shorten the stem to compensate. Perhaps he reasoned that wood is more absorbent than the Vulcanite or horn he was making the stem from, and would therefore make for a cooler, drier smoke. And, perhaps I’m imagining all of that. Maybe he just thought it would look cool. For whatever reason, he made the shank longer and the stem shorter. He probably thought of it as a long-shanked Billiard. Eventually, the idea took hold and other pipe makers followed suit, some making their pipes with tapered stems, some with saddle stems and some with oval shanks.

Taxonomically, the strongest name associations are with the Canadian and the Lovat. The weakest link is the Lumberman. Some call all oval-shanked variants Canadians, but then some call all long shanked pipes Canadians. It’s a pretty popular name.

1. Canadian. A Canadian features a Billiard-shaped bowl with an oval shank that is 1 ½ times as long as the bowl height or more. The stem is tapered and very short.

2. Lumberman. Take a Canadian and put a short saddle stem on it's oval shank and you have a Lumberman. As mentioned above, some call it a Canadian or even a Saddle Canadian.

3. Liverpool. If you have a Lovat (long, round shank) with a tapered stem, you have a Liverpool, which can be thought of as a long-shanked Billiard. I’ve found several pipes like this that are called Canadians, but lack the oval shank.

4. Lovat. A Lovat is a Billiard with a longer than usual round shank. It always features a saddle stem. One thing I should point out, though, is that the shank of a Lovat is usually about 1 ½ times the height of the bowl, and rarely longer. The stem is longer than that of the other long shanks, but shorter than a standard billiard. You can think of a Lovat as a long-shanked saddle Billiard. On the other hand, I have a Don Carlos pipe that has a round shank that is roughly twice as long as the bowl height and has a very short saddle stem. It has all of the features of a Lovat, but a Lovat, as currently recognized, should have a shorter shank and longer stem than this one does. Just another example of the ambiguity of pipe shape names.

As I’ve said before, the naming of pipes doesn’t always follow set rules. It’s confusing to everyone. I believe that pipe makers sometimes begin to make a particular type of pipe, but, due to surprises hiding in the block of briar or a flash of inspiration, end up with something they didn’t expect. Then they have to name it. Or, that could just be my imagination working overtime.

I have often heard it said that a long shank equals a cooler smoke. This hasn’t always been the case with me. I have several long shanks and like them very much, but I don’t find them to be particularly cooler or drier than a standard Billiard. For that matter, my Churchwarden doesn’t smoke significantly cooler than any of my other pipes either. I’m just saying.

If you have a problem keeping the variations of Canadians, Lumberman, Liverpools and Lovats straight in your head, join the club. I can spot a Canadian or a Lovat right off, but the Lumberman and Liverpool confuse me. I have to look at the shapes chart to be sure. It just makes the “Long Shanks” name that much more useful.

Next time, we take a look at the round bowl pipes: the Apple, Ball, Egg, Author and, yes, the Hawkbill.

The following are representative models of the Long Shank pipes. Thanks once again to Chris Keene’s Pipe Pages (www.pipe pages.com). Some listings are best guess on my part. Inaccuracy and errors are par for the course.