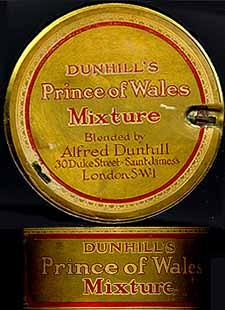 Very early on Dunhill apparently became a favorite of Edward, Prince of Wales. The company named one of its blends in the Prince's honor and in 1921 the Prince gave the company a Royal Warrant. By 1927, if not earlier Dunhill made that warrant a part of the labeling for some blends including London Mixture and Old Colonial. Although interestingly, the warrant was never added to the Prince of Wales label.

The warrant was most certainly removed with the abdication, but then, in 1938, a Royal Warrant was received from the new King George VI and that warrant was added to labels ("By Appointment [Royal Crest] Tobacconist [/] To H.M. the King").

Other then the then relatively recent Royal Warrant from the King, the addition of a "War Time Packing M4A" imprint, and three other points noted below the My Mixture #10 tin from World War II pictured below is probably typical of the 4oz My Mixture knife lids from the twenties through the fifties.