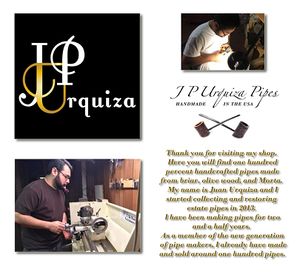 Juan Pablo Urquiza loved the way pipe smoke smelled and began collecting and refurbishing old pipes as a hobby. One year later he made my first pipe out of cherrywood. One year later he made his second pipe out of olive. Online forum friends liked that second pipe and ordered about five of them, which motivated Urquiza to make pipes out of different types of wood, including rosewood, olive, and briar. 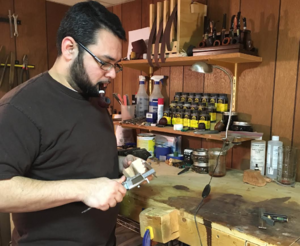 Urquiza in his workshop 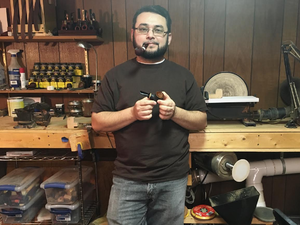 Urquiza in his workshop

Up until March, 2015, 95 percent of Juan Pablo's work was done by hand, shaping pipes using files only. While taking longer than using a lathe he enjoyed seeing the finished product and knowing that most of it was accomplished using only hand tools. Now, though his production is still limited, in order to produce more pipes he also uses a lathe.