William Hendrix was born in Amsterdam, Holland in 1882. Through his father he learned fluency in several languages; considering his father was a teacher of language, these attributes to his upbringing could have turned him down a much different path in life. But at a young age, Hendrikx knew his interests lay in craftsmanship.

While still young he had the opportunity to visit a pipe factory in Holland. He was intrigued enough that he secured a part time position at the factory and began his early education in the art of pipe making. 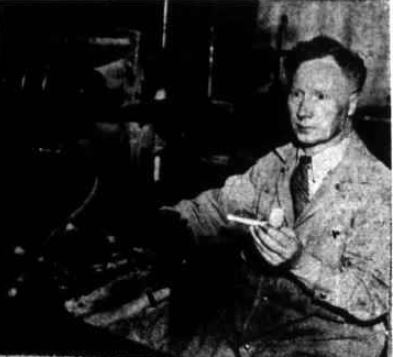 As early as 1923 he managed the Adolf Frankau & Company, Inc of College Point, NY . This manufacturer used the idea that in comparison to European makers, (ex. English company that hires foreigners to work in their mills due to lack of local craftsmanship from their own countrymen) an American company that hires a completely American workforce could produce pipe of the same if not higher quality.

Over the next two decades, he would act a manager of both the BBB Pipes (A. Frankau's American factory) and Hesson Pipes Companies, both located in College Point, LI.

His next move would be to attempt his hand at farming in Ulster County, New York. The stock market crash put his plans of countryside leisure on hold and he was pushed back into the work of his calling.

This time setting up shop in Ulster Park, Town of Esopus, Ulster County, New York, he began producing handmade pipes in a personal barn style workshop. This would have been c. 1928. His name was already known to a few in the industry, but the slogan of “Buy American Products” painted in large lettering on the side of his shop, and a roadside sign advertising “William Hendrikx, Briarcraft Pipes for Sale”, drew enough local and by-passer attention that he was able to maintain a reputable business. 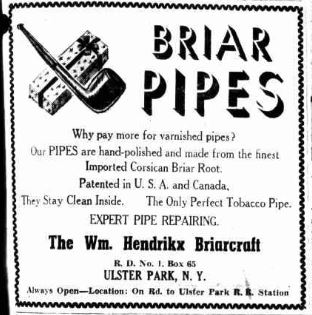 Mr. Hendrikx also held a 1934 patent (US1952862 A) for an improvement to the tobacco pipe, inclusive of a filtration system in the stem, assigned by him to the William Demuth Company. According to the text in [[1]]; below, there is reference to the patent never being officially sold due to financial related issues. The stem he invented would be featured on many of his own pipes made in his Ulster Park shop.

According to the NYS Health Department's records, William Hendrikx passed away on the 23rd of August, 1961. The Kingston DailyFreeman issued a short paragraph on his departure, attributing it to a self inflicted gunshot wound to the head. He had apparently been in ill health the last two years of his life and could no longer physically carve his pipes.