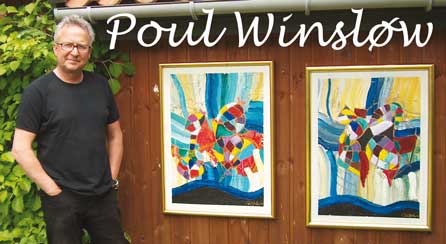 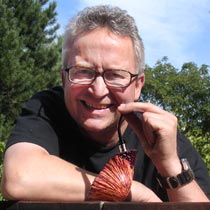 The danish pipe-maker Poul Winslöw is 45 years old but has been in the business for 28 of them. So he was almost a boy, when he started. His first job was with the Danish pipemaker Preben Holm, and I first have to say a few words about this important and, I think, well-known man.

Preben Holm was the artisan who made pipes of "Danish design" famous in the sixties. I think he is well-known to most collectors, especially in the U.S., as most of his pipes were sold there. He had a very large production and when he was at the top he had 45 employees and, at that time, he himself only was 22 years old.

In 1983 Preben Holm wrote an autobiography which was published in T.P.S.E. in 1994 (See Book II page 670-673). This is a most interesting piece of history. In the end of this autobiography he writes: "Of course, I would not have succeeded if I had not employed some good assistants, especially my head-assistant whom I engaged 16 years ago when he was 16 years old. I trained him from when he was a big boy, and from experience I certainly find that in this way you get the best assistants." That 16 years old boy (actually he was 17) was Poul Winslöw.

However, the U.S. market for Preben Holm's pipes dropped radically and he himself became seriously ill, so in 1985 he had to close his factory. In 1989 he died only 43 years old. 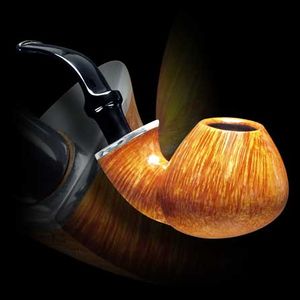 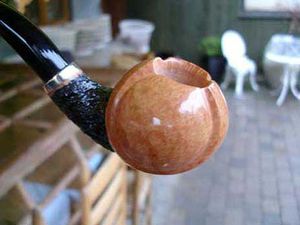 In 1967 Preben Holm was advertising for apprentices to his pipe-factory. Poul read the advertisement, thought it might be something and decided to go there and try to get a job. Well there, he found that a lot of young boys had had the same thought. They were all interviewed by Preben Holm in person and obviously he found that Poul was just the type of boy he wanted, for he got the job.

Young and optimistic as he was, Poul thought that he should start making pipes directly. So he was a little disappointed when he found that his first duties were to sweep the floors and perform other unqualified tasks. But it did not take long till he took part in the production of pipes and very soon he showed his ability. So just a few years later he found himself being the head-assistant of Preben Holm. A proof of how highly valued he was by Preben Holm, is that when he had to do his military service, he was offered to keep 1/3 of his salary during the service, just to make sure that he would come back afterwards.

But, as mentioned before, the luck for Preben Holm turned and when Poul got back from a vacation in 1985, he found the factory closed and that he himself no longer had a job. Of course this was a hard blow, but it was also a chance to make an old dream come true - to start on his own. He decided to try, and built a small workshop in his house in Hvidovre. Of course it is hard to start like that and Poul says that the first years were tough. But he got good help from Stanwell, the biggest Danish pipe-factory. He went with them to different exhibitions abroad, where he made almost ready pipes completely ready, while the customers were watching. In this way he got the opportunity to make contacts with people in the business, so these exhibitions were very important to Poul, even if he was not allowed to sell his own pipes at these occations. 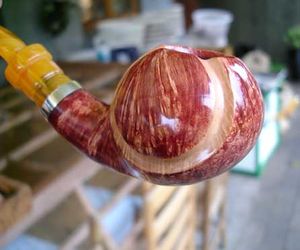 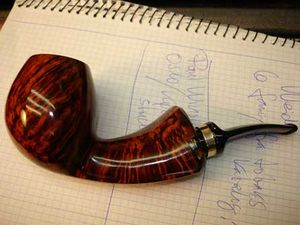 Poul still has his work-shop in connection to his house in Hvidovre, a southern suburb to Copenhagen. He has re-built an out-house into a quite small but very well-organized place for pipe production. He works here together with 2 assistants and they make about 900 pipes a year and to-day he has difficulties in fulfilling the great and increasing demand for his pipes from a lot of different countries.

Poul wants his pipes to be colourful and make the owner happy in a - perhaps - rather "grey" world. Maybe this is inherited from his father, who was a painter. He likes to use inlayings in different materials like buxbom, acrylic, silber, laburnum (a very beautiful wood with a rich grain) and others. He also uses a variety of colours from dark-brown to very light. 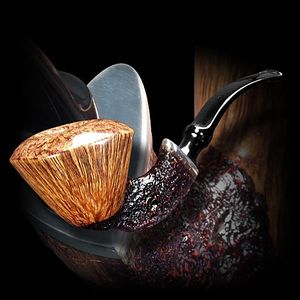 The original WINSLÖW-pipes are of course rather expensive, but Poul also wanted to have some cheaper pipes to offer to his customers. So, some years ago, he started to make a series called CROWN. He absolutely states that these pipes are no seconds to the original WINSLÖW-pipes. They are made from briar with less dense grains and potential - sorted upon arrival in his workshop. They have a preformed acrylic mouth-piece that is finised to the pipe and not a hand-cut acrylic stem. From personal experience I can affirm that also the CROWN-pipes are of a very good quality.

Old Winslöw-pipes are stamped with his name in big block-letter or in an oval. Now he has changed this and uses his symbol with a fancy pipe and the name WINSLÖW in small block-letters. There is also a difference on the stem between old and new pipes. Old pipes have one silver-dot on the stem (in some rare cases there may be 3 in the shape of a triangel) but on new pipes there are always 2 dots, one of them a little bigger than the other.

The top quality is marked P.C. (Private Collection). The pipes not qualified for this top-grade are marked A-E, where pipes marked A are the best. All pipes are made from Corsican briar.

A handmade wooden tamper is delivered with every WINSLÖW-pipe. All pipes comes in a black leather-pouch with the name WINSLÖW in gold and also the tamper has got a little leather-cover of its own.

An excellent selection of Winslow pipes is available at Pipedia Underwriter, lepipe.it