The following article first appeared on Smokingpipes.com here: The Mayans & Tobacco, November 9, 2018 by Chuck Stanion in Pipe Line and serves as an interesting introduction to the origins of this very interesting pipe recently acquired by Racine & Laramie Tobacconist. 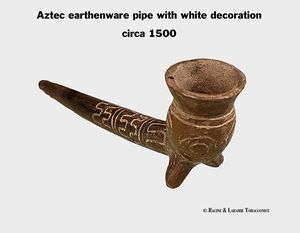 The Mayans and Tobacco
Tobacco was first used by humans about 18,000 years ago, according to the accepted scientific canon. The Mayan civilization was the most likely to have first cultivated the plants, however, beginning about 5,000 years ago. In fact, two probable gods of the Maya were depicted in stone carvings smoking what look like very large cigars. Some scholars in the field refuse to narrow that possibility to cigars and when writing about the carvings refer to the smoking apparatuses as "cigars or crude pipes"; others refer to them only as "cigarettes"; still others as "pipes."

The genus Nicotiana includes 64 different species, of which only two are used for smoking: rustica and tobacum. It must have taken extensive experimentation to find the right ones, but it's probable that at some time humans have smoked or eaten just about everything.

The Mayans regularly offered tobacco to the gods, both as an incense burned on the alter and blown by worshippers. It is said that tobacco of that era was stronger than it is today, but given the frequent hallucinations of priests during worship, as shown in carvings, it may be that another species was used by priests for ceremonial use. Tobacco is in the nightshade family, after all, but we don't know if these early Central Americans used a different species for religious purposes.

In 2011, a Mayan container with the inscription, "the home of his tobacco" (or "her tobacco"; the pronoun translates as "its") was tested and nicotine was found inside, proving that tobacco was stored in the jar. It was the first physical evidence of tobacco use by the Mayans. In 2012, a cache of 800 Mayan cigars was found in clay pots and were dated to 600 years ago. Amazingly, they were still in fine condition and smokable, as they'd been buried in urns in the cool earth. The entire batch was auctioned for $507,000.

Tobacco's mind-relaxing effects were appreciated by Native Americans during times of religious observances and in times of war. In Smoking, Class and the Legitimizations of Power, Sean Gabb writes:

Among the Mayans, it [tobacco] was regularly offered to the gods both as incense burned on the altars and as smoke from the mouths of worshippers. One of the best-preserved reliefs from their ancient temple at Palenque shows a priest smoking a cigarette. Among the Aztecs, it was a necessary accompaniment to the ceremonies at which thousands of captives were slain in sacrifice to the god Tezcatlipoca. The medicine men of the more primitive Tonoupinambaultiis tribe in Brazil would fill and light their pipes and puff the smoke into the faces of the assembled laity, the purpose of this being to transmit the heroic virtues.

Obviously, tobacco was an important plant to Native Americans, but the Mayans started it all. The Temple of the Cross at Palenque, dedicated by the Mayans in A.D. 692, in Southern Mexico, was part of the Mayan civilization that occupied most of the Yucatan Peninsula in Mexico, as well as Guatemala, Belize and Honduras. They built raised highways, cities, and temples; they developed a sophisticated calendar more accurate than we use today. The Mayans maintained these advances for 600 years, until about A.D. 966. Yet when Cortez found them in 1519, only remnants and small villages remained. 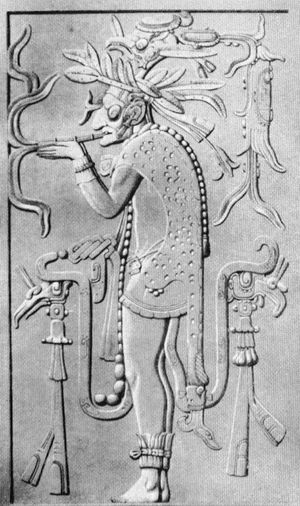 A reproduction of a carver from Palenque, depicting a personage known only as God L, one of the most important deities of the Underworld., courtesy Smokingpipes.com

The image (shown to the right) is a reproduction of the carving from Palenque, and shows a personage known only as "God L.," among the most important gods of the Underworld. He wears the wristlets and anklets connoting god status, and he's blowing great billowing clouds of smoke through a cigar. It's doubtful it's a pipe, as there are three vertical rings wrapped around the shape to hold it together, similar to today's cigars from the region, which are held together by tree bark.

The image of God L., whether a depiction of a man playing the part, or of the god himself as imagined, exemplifies the importance of tobacco to this ancient culture. Archeological research continues and hopes to explain much more about the Mayans. We already know they were advanced; they had calendars, roads and, most important, tobacco.