How to Read your Sandblast

How to Read your Sandblast, by Trever Talbert, from his Blog

"This blast isn't even on both sides!" How many times have pipemakers and vendors heard that line, usually in reference to a pipe that's simply not cut inline with the ring stacking? After the popularity of my last article on sandblasting, I thought I would do another devoted solely to explaining just how grain and growth rings are arranged in briar, and how to "read" the surface of your sandblast to learn more about it. Let's start with how grain affects, and is affected by, sandblasting. In the pic below you can see sketches of a typical briar block:

Imagine you are looking at the block end-on. Grain rarely actually goes straight up from bottom to top (Wouldn't that be easy?), so I've drawn in figure A some more typical curved, slightly sideways grain lines. Laid through the block are also the briar's age rings, which are shown as shaded horizontal bars. The age rings curve and bend with the shape of the wood. Also, note that they tend to be more widely spaced deeper down in the block, and to tighten together considerably the closer they are to the outer plateau surface.

Figure B shows what you would get if you sandblasted that block - a surface where each age ring creates a pronounced ridge. But this only shows age rings, not actual grain. One can picture a briar block as a stack of slices of cheese, with each slice of cheese representing one year's growth. Punching down through these stacked layers are the lines of grain, like long needles pushed down through our cheese slices. They resist sandblasting ferociously, and limit the degree to which one can achieve sandblasted depth between the layers of cheese. 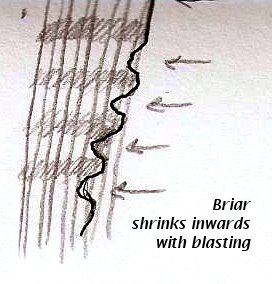 Blasting at higher pressures can only help so much - the more you blast, the more the total surface of the wood will sink in, as shown in the drawing above. It's the bamboo branch effect - One can easily snap a single branch, but bundle fifty of them tightly together and Hong Kong Phooey would have a hard time punching through them (particularly if his cat wasn't along to help). This is why very tightly-grained briar tends to render less interesting sandblasts - the tightness of the grain itself resists all but cursory ring depth. Drawings C and D, below, are a typical comparison of the difference in surface depth between a block with wide-spaced, loose grain lines (C) and a block with very tight grain lines (D): 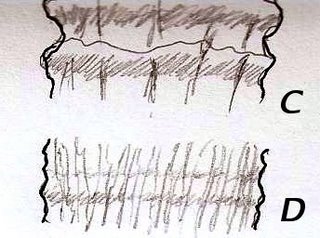 Now that we've got a handle on just how rings are created and what they are, let's take a look at a typical bowl. Getting a "ring grain" - meaning a stack of vertical rings - is actually no great challenge if one has the capability to drill blocks at off-angles inline with the grain, but sometimes this isn't possible (particularly in machine-made shapes and middle-grade handmades, for reason of production labor costs), and sometimes the pipemaker doesn't even want this effect because he's bored by it (me). The problem is that the effects created are sometimes misunderstood by collectors unable to visualize how the grain in their pipe flows. For example, take bowl E, below: 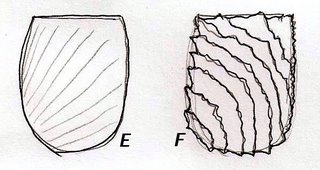 There we have a nice crosscut billiard-like bowl, seen from the front, with grain flaring across the bowl and producing a lot of bird's-eye on the right side. Picture F shows what this same grain arrangement would become after sandblasting - The rings show horizontally to the direction of the grain fibers. I once heard someone complain that a pipe's grain was "sagging on one side" when in reality it was as above, simply a factor of the sideways tilt of the age rings in the bowl.

The disadvantage in offset ring stacking like this comes where there is a lot of bird's-eye - the "end points" of the grain fibers. Bird's-eye looks totally different after blasting from grain blasted from the side - It won't blast deeply and there are no growth rings to see, because you are essentially looking down at the stack of cheese from the top, rather than being able to see each layer from the side. This is where folks will sometimes mistakenly think a pipe isn't "blasted evenly" - of course the pipe is blasted evenly, as in to equal pressure, equal attention, etc - but the surface created is completely different.

Let's look at some real examples. If we take that blast in F, above, and look at it on both sides, we'd see this: 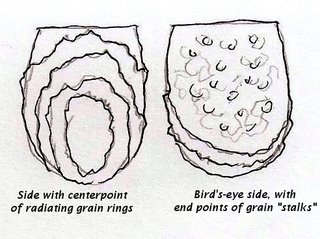 And here is the same arrangement on a real pipe! First, let's look at this grain layout on a smooth example: 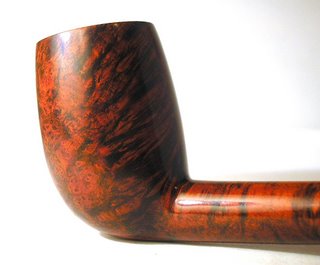 And here is a nearly identical grain layout in sandblast version - First the side that matches the bowl above, and then its opposite side: 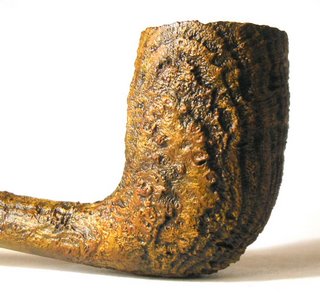 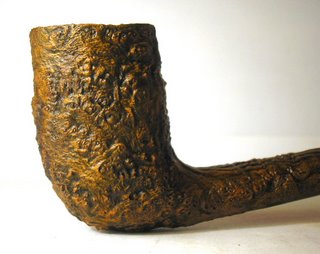 (And how does everyone like this finish? It's new... or rather, it's the end result of a LOT of gradual experimenting and developing. No name for it yet, but I think it looks very nice, showing off the blasting detail with great highlights and all without having to buff the edges off. Some pipes with this finish are currently queued for shipment to P&P and to Israel)

Now that we know how to recognize the layout of the grain in the bowl, we know what we're looking at and how to recognize it. You can see the age rings, the lines of the grain passing through them, and every individual "stalk" of grain from the top point down, on the side that is all bird's-eye. That swirling miasma in the second photo is the result of looking directly down into the grain of the wood, as if you were looking onto the outer skin of plateau.

I'm fond of unconventional grain layouts, personally. I like it when every pipe is NOT necessarily a stack of growth rings from top to bottom. Probably my personal favorite of unusual grain layouts is the back-to-front seen in the sketches below: 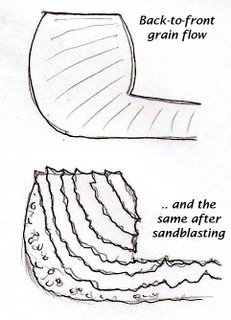 This is where the grain starts on the back of the bowl, the part facing the smoker, and expands outward over the bowl and shank. I find this look particularly appealingly craggy for some reason, probably because it so perfectly illustrates the radial fan of grain that existed in the original block of wood. Here is a great example of this layout in smooth: 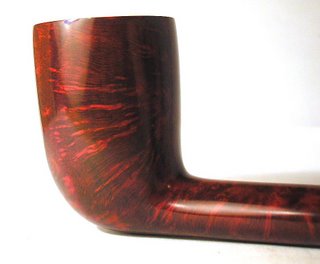 And here is a very similar layout after sandblasting: 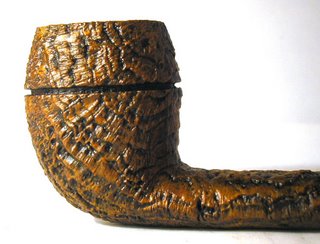 I hope this has helped a bit to explain why various sandblasts look like they do!