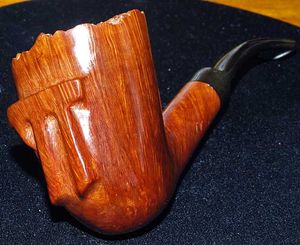 Jack H. Weinberger had been a lawyer in Virginia. After his retirement at the end of the 1960’s he moved to West Caldwell, New Jersey where some of his family and relations lived. JHW, as he marked his pipes later, was a lifelong passionate pipe smoker. He is reported to have smoked one pipe each day from rising till hitting the bed again filled with his own chocolate mixture, which he successfully marketed later on.

Probably he looked for some waste of time and made friends with pipemaker Max Schulte in Maplewood, NJ. As Schulte’s nephew Howard reported, Weinberger often sat in his father’s workshop for hours and hours, enjoying his pipe and a mug of coffee and simply watching. This was JHW’s "training" to become a pipemaker! Thus he may be called an “eyedidact” rather than an autodidact.

He furnished a workshop in the cellar of his house – in fact a chamber measuring 2.50 × 6.00 meters. He bought some tools and some old machines, which partially were converted by himself. Somehow he also found suppliers for ebonite in England and later in Germany and for plateau briar from Greece. Then Weinberger began to make freehands.

Two things met thereby: 1. JHW must have been a splendid nature talent, turning out well engineered and finely crafted pipes from his very first attempts and 2. his pipes came out at the right time! The enthusiasm for freehand pipes – perhaps it’s better to say “fancy pipes” - made in Denmark had sloshed the United States years ago. Pipes by Poul Hansen e.g. scratched the 500 Dollars line around 1970 and the climax of that boom in the 1970's wasn’t reached yet. On the other hand, there were many patriotically reflected pipe smokers in the States, who demanded that "our own carvers" should finally offer such pipes. Thus Weinberger’s pipes and the expectations of many buyers matched perfectly! 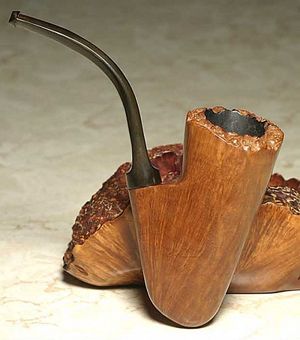 The first JHW Pipes were enthusiastically welcomed in the tobacco shops of New Jersey. The attorney in retirement became a fulltime pipemaker working 10 to 12 hours a day. Weinberger soon looked for some assistance and hired a lad from the local Highschool in 1971, who wanted to earn a few Dollars. Actually one might forget his name Gary Friedman immediately, because he was lazy and Weinberger fired him after a short while. All the same, Friedman did one thing of merit during his time at JHW’s: he passed on a number of rejected pipes Weinberger gave him as a present to some of his schoolmates who consequently became pipe smokers.

Note: One of the High School Students who worked for Jack in the early years was Bruce Magnotti. Bruce wrote the following rememberance of his time working for Jack: "I worked for Jack H. Weinberger when I was in High School in West Caldwell in 1968 and 1969. I worked with Lanny Friedman (not Gary) and perhaps he was fired in 1971, though he worked there for quite some time. Lanny and I used to take the briar pieces that Jack had sketched a pattern on. We grinder and sanded and rough shaped the pipe. Then we would drill the two holes, one for the chamber and one for the stem. Jack would do all the finish work and sand and polish the briar until the creation was finished. Then Lanny and I would stain and polish the pipe, fit the stem (unless it was a fancy stem), and finish polishing."

Another one of those students was Curt Rollar. When he experienced that Friedman was dismissed, he ran down all the way to Weinberger’s house to apply for the job. He got it! At the beginning his tasks were not too exciting: he cut of the bark from the briar with a knife, did the rough sanding and the polishing. Rollar was industrious and worked with great devotion under Weinberger’s watchful eyes. Rollar was gradually given more liberties and finally he was allowed to make complete pipes. After a very short time Rollar’s pipes achieved an amazingly high level and immediately after graduation from Highschool he was contracted as a fulltime pipemaker.

Actually Rollar became the driving force at JHW Pipes. Soon he was capable to produce the whole range of shapes from classical pipes to extravagant freehands. „The hallmark of his work is precision,“ Mark Tinsky later appreciated. Rollar’s work made it possible for Weinberger to take more care of the business aspects besides his own pipemaking. He did that most successfully! After the first local successes in New Jersey the brand JHW Pipes conquered the adjacent State of New York starting from Mark Killig’s tobacco shop in Whiteplains. The 1973 RTDA show in New York City turned out to be the nation-wide breakthrough. 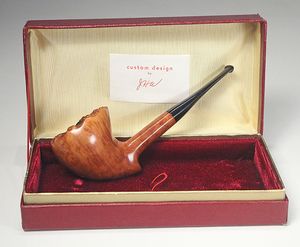 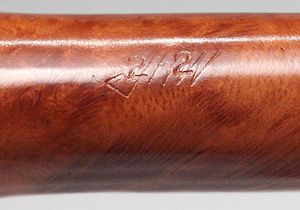 As JHW Pipes prospered so well, Weinberger needed further hands and so he hired his nephew Vic Steinhart who lived in the adjoining house. Vic, obviously highly talented, created excellent freehands after a remarkable short while. He also brought along a number of friends and thus the workshop became a meeting place of further Highschool boys, among them a certain Mitch Kaufman, who was an excellent basket ball player - the star of Caldwell High since 1971. Kaufman didn't care about pipemaking particularly and less about working generally. He just used to hang around, but he attentively watched Steinhart's efforts and achievements. But Kaufman succeeded to persuade Steinhart to start a pipe workshop on their own after graduation from Highschool. He even managed to estrange Weinberger's polisher. The young entrepreneurs called their company SK Pipes and resided in a rented house in the neighbourhood of JHW's.

Another pipemaker was Scott Parfumi, a grandson of renowned pipemaker Joe Cortigiano. Parfumi left in late 1976 to work in the tobacco store of his family in New York City. There was also a female pipemaker – Diane Doerr. Her speciality was shaping the rims of the bowls to a form reminding of lips. These pipes had a pretty floral touch. Completely sanded by hand, this detail work required very much time and the number of these pipes remained accordingly small.

Two more names to mention: Gordon Soladar (Broken Pipe) and Chet Gottfried. The latter told of a funny trick Curt Rollar and he played once in a while on Jack H. Weinberger: They grabbed an old reject that JHW had forgotten about and burned through both sides of the bowl with a blow torch and generally scorched the hell out of it and broke the stem to boot. They placed it in a box with a store’s label on it adressed to Jack and made it look like UPS had just delivered it. Included was a note that said that the customer complained the pipe was smoking hot… Please replace! That really made Weinberger’s day and he went on all afternoon about that pipe. How could anybody have smoked a pipe into that condition??? He couldn't believe it. Finally they had to tell him as he was going to call the store owner about it. Weinberger had a pretty good sense of humor and so it was all right.

The last important co-worker was Mark Tinsky, a close friend of Curt Rollar since Highschool days. Tinsky had already worked for JHW as a polisher when he graduated from school in 1976. As Rollar was on a longer vacation wandering through the Appalacian Mountains, Tinsky soon moved up to be a fulltime carver. He said later "I doubt I made anything of merit while working for Jack.."

Did we mention Frank Augsburger? Aged 17 he came down from Illinois as an apprentice. His mother had done the necessary negotiations, procured a flat and a car and everything else. The young man didn’t have any time at all, he was impatient and hasty and had the wildest conceptions about pipes. In a blue hour he once made a thing which his colleagues named "The Monster of Loch Ness" and even made JHW shake his head. Deeply frustrated Augsburger went back home after approximately six months. Nevertheless the time spent at JHW’s wasn’t completely wasted, because he became quite a good pipe maker years later. 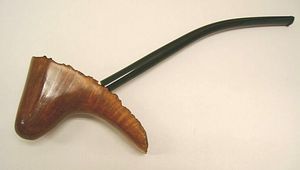 Around 1976 JHW Pipes was on the height of its business success. The pipes sold much faster than they could be carved. Rollar was strictly watching over the quality. Weinberger himself however hardly made pipes anymore. And if so, he experimented or created strange pieces he shaped to the form of aeroplanes, toilets and other stuff like that.

At the end of 1978 Rollar and Tinsky went away founding The American Pipe Company in 1979. A big loss and a deep cut from which JHW Pipes should not recover. Weinberger was too old by now to stick to the work bench the whole day and he had no good course horse in the stable any more. And among the newly hired boys from Highschool was none to wake some hope. Thus the company died slowly and Jack H. Weinberger passed away in 1982.

His fame however shines on. He became one of the most important characters of the American freehand movement. His pipes attained cult status and he was proclaimed posthum to be "America’s Sixten Ivarsson". This might appear a little bit too exaggerated, but his stylistic influence on many American carvers is not to be disputed.

Mark Tinsky said “He had great imagination and ingenuity. He was able to modernize the shop as it developed. He was great at getting publicity. He wasn’t afraid to take chances. He also was a pretty nice guy and good to work for. He loved and lived in the world of pipes. He was a real character and I’m happy to have had the chance to work under him.“