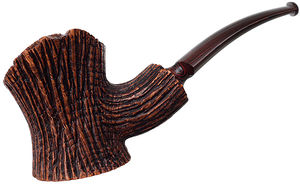 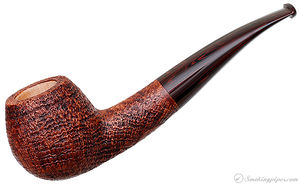 An American, living in Great Britain, bearing an Icelandic name

The Larrysson name is Scandinavian, originating from Iceland. That is where I was born. Larrysson is my middle name, based on my father’s first name and my relationship to him. I’m Larry’s son, or Larrysson. My childhood years, however, were in mid-west America, among the rows of corn in Indiana. In August of 2002 I married a Cornish girl and immigrated to Cornwall, England. Cornwall is located in the Southwest tail of England, bordering the historic port of Plymouth in Devon.

In 2000 I became a member of Indiana’s Tri State Pipe and Tobacco Club, Dan Hudson, one of the club founders and friend, introduced me to world of pipes through the Chicagoland International Pipe Show. I was overwhelmed with the sight of so many beautiful pipes. I realized my career calling that day. I would slowly work towards becoming a full time pipe maker.

The opportunity to start pipe carving presented itself shortly after immigrating to Great Britain. Marco Janzen, a pipe repairman in Hamburg, Germany, had all the raw materials I needed to start carving. Marco taught me how to use a Myford lathe to drill briar and turn stems. I learned what tools are needed for the craft and how to organize a workshop to run efficiently. Shortly thereafter, I produced and sold my first ten pipes before receiving a commission to make the 2004 TSPTC club pipes. (Paul was furthermore commissioned to make the 2005, 2006, 2007 and 2008 TSPTC club pipes.)

In February 2006, my wife, our son Isaac and myself moved to the highest village in Cornwall, Pensilva on Bodmin Moor. Bodmin Moor is a wide-open expanse of land used for free roaming sheep, cows and ponies. It is also where most of Cornwall’s mining history took place. Our new property did not have a workshop, but it did have an old derelict pig shed, or piggery, located at the end of the garden. Both the cottage and the piggery were built in 1820. It took 18 months to expand and refurbish the piggery into a custom made pipe making workshop.

Larrysson Pipes on the Subject of Briar

Every pipe maker has a set standard for the level of perfection required to bear his or her stamp. This standard includes the quality of materials used, especially briar. Briar is a difficult material to work with, as it may have a tiny or large flaw hidden beneath the surface at any given time. The best quality wood has a better probability of having superior grain or minimal sand spots, but as briar is a natural material there is no guarantee. Artisans most often use this more expensive briar for the production of high grade pipes.

High quality briar, in the hands of a good pipe maker, will yield a high quality pipe. A pipe with a few exterior flaws will smoke just as well as a pipe with no flaws, as long as the same care and attention to detail go into the design and construction of that piece, and the wood has been properly cured. If the briar is well cured, and the engineering precise, a pipe will smoke well. If a pipe is engineered correctly but does not smoke well, one may conclude the wood has not been properly cured or the quality of the wood is poor.

I believe in using top quality materials, and putting those materials together with precision and care, creating a high quality smoking instrument. The aesthetics of a pipe are equally important. A pipe should have grace, balance and flow, with wonderful tactile feel and a comfortable mouthpiece. The finish and color, whether smooth, rusticated or sandblasted, should visually stimulate and please its owner. All of these qualities I strive to realize in every Larrysson Pipe.

The Construction of Larrysson Pipes

Larrysson pipes uses extra grade plateaux and cross cut briar from the workshop of Romeo Briar. Living in the European Union, I travel to Taggia, Italy to personally select the briar.

A lathe is used to drill the tobacco chamber, mortise and air channel. A carefully drilled 4mm air channel ends at the very bottom and center of the to tobacco chamber. There is very slight gap between the tennon and bottom of the mortise to allow space for the wood to expand, slightly chamfered to prevent air turbulence. The tobacco chamber is left natural, lightly hand sanded for a key to aid the developing cake. Disk sanders are used for rough shaping, followed by rasps and files for the finer details. If a stummel has only two or three tiny sand spots and interesting grain, it will be made into a smooth grade. If there are more than a few spots or the grain is poor, it will be rusticated or sandblasted. No fillers are ever used. Alcohol and/or water based dyes and carnauba wax are applied to the exterior of the pipe so the wood can breathe naturally.

I use acrylic for the mouthpiece, preferring the workability and maintenance free characteristics of the material. I use both acrylic rod and rough unfinished mouthpieces, depending on the pipe. All stems are fitted with a derlin tennon, providing strength and a smooth, snug fit. A copper dot is used for the stem logo.

All Larrysson pipes are made with the same care; therefore there is no grading system. Special pieces, however, will bear the symbol of a King’s crown.

There are two sets of stamps, the application depending on the shape of the pipe.

The dating code will be the pipe number followed by the year of creation. For example, pipe number 100 made in the year 2008 will read 100-08.