Arne has been working with meerschaum ever since he first got his hands on a block in the beginning of the 1970's. Arne Urup tells:Meerschaum is a very easy material to work with. You don't need any machines, everything can be done by hand. A clump of meerschaum isn't consistent in its hardness. There are both soft and hard spots which is why a pipe rarely colors evenly. 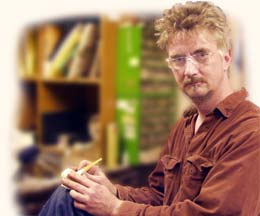 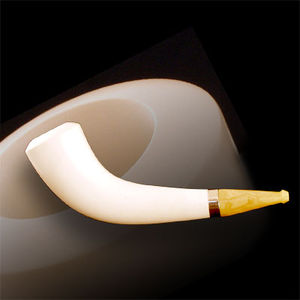 It's almost as if meerschaum was made to be made into pipes. The stuff is almost impossible to burn and sucks up so much tar and heavy metals that it's actually healthier to smoke a meerschaum then briar.

Shapes which would be very difficult to execute in wood can be quite easily done in meerschaum. I try to work with the material instead of against it. All of the pipes made by me are handmade of the best possible materials. The techniques I use are very old which can be seen in the quality of the finished product. I enjoy making pipes, cigar and cigarette holders that are unique, one of a kind. Meerschaum is a very forgiving material. Even old and used pipes still look great. Each pipe reflects its owner and the way he smokes. But it still is a rather delicate material. Some people think that it isn't very good because they can't knock the pipe on the bottom of their shoe or on the edge of an ashtray. Other people expect meerschaum to color evenly from the very start but that' s impossible. If you want your pipe to look great you have to keep smoking it and be patient.

Arne Urup is famous for his “Lyre-shaped” pipes, and explains why: 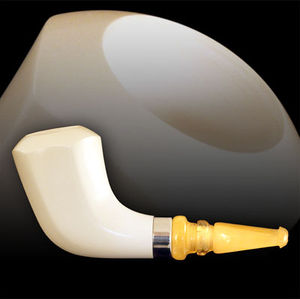 In 1815 an important meeting of European leaders was held in the city. Each of the delegates was presented with a pipe from the city which was famous for their carving of meerschaums. But the shape is also known as a "Lyre" because of the shape of the stem.

I learned how to carve the shape and make the special mouthpiece from Henry Jørgensen. He also specialized in meerschaum carving and was very well known here for both his repair work and his pipe making.

The mouthpiece of a "Congress" is not only shaped like a lyre but should also have three rings of amber placed between the mouthpiece and the pipe itself. The tap is made of bone threaded like a screw. I can make all of the parts just the way the original craftsmen used to in Vienna. The pipe is both practical and looks very harmonious when it takes on color.

People aren't sure at first how it should be held. They think that the tobacco will fall out. The pipe should be held between your fingers like a cigar, that way you'll never have to touch the meerschaum where its warm. 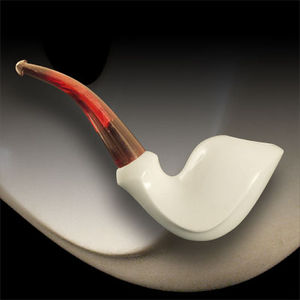 Amber is a natural material. The countries surrounding the Baltic have, since the times of the Vikings, been known for their "northern gold". There is still a lot of amber here, so supply isn't a problem.

My amber comes from Lithuania. I choose to work with "milk amber" because it comes in large pieces, it's very strong, without a lot of debris in it and it's cloudy. I could choose clear amber but after a while you would be able to see the smoke canal. It takes away from the attractiveness of the pipe.

All amber is the same and colors naturally over time due to oxidation. When I'm going to make a mouthpiece, I start with a large clump of solid amber that doesn't have cracks or holes. I use a butchers hacksaw to first cut the clump into rectangular pieces. It's important to take your time or the pieces will crack. Then I use a sander to round the edges until I have a tube shaped form.

The amber is screwed into the lathe and I use a bicycle spoke flattened at one end to bore the air hole. You can' t bore all the way through at one time. The amber has to be bored from both ends at the same time. I go in a few millimeters at a time on each side. If I were to drill all the way through the amber would break because at the end there is nothing to hold the piece together. But in the middle the amber is very strong.

This is one of the techniques I learned from Henry Jorgensen. When I 'm finished, I have a perfectly round piece of amber with an air hole right through the middle. At one end I thread the inside of the air hole. A teflon tenon is screwed into this end of the mouthpiece which fits into a teflon mortise in the pipe' s shank. It takes me about four hours to make a mouthpiece. A person should never use any kind of cleaning solution on amber, only water and soap. The price depends upon length but roughly a two inch mouthpiece costs about 200 US dollars. 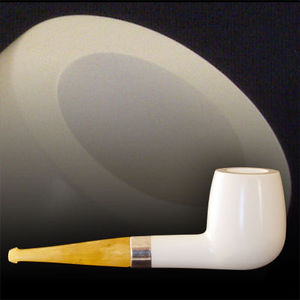 The coloring of a meerschaum is what gives the pipe its charm. The interesting thing about meerschaum is that it colors first where it is coolest and on the surface. That is why the you often see the shank of a pipe first turn a beautiful golden brown. Over time the whole pipe will color. What these inserts do is bring the bottom of the bowl higher up so that a chamber is formed underneath. This chamber gathers smoke and doesn't become as heated as it normally does which gives the bowl a chance to color. I've seen these made of plaster and other materials but all of my inserts are made of block meerschaum. These inserts can also be used in briar pipes. They can protect the bottom of a thin bowl and they give you the chance to smoke all the tobacco at the bottom. I make them in all sizes and they cost around three US dollars. Getting off to the right start is important if you want to give your pipe the best possibilities at coloring. With a new pipe you should always fill the bowl up the first two or three times.

Meerschaum isn't like briar and doesn't need to be broken in, but what you're trying to do is move as much of the wax in the pipe as possible down to the shank. If you fill a new pipe half way all the wax in the bowl above the tobacco will be burned off since it doesn't have anywhere to go. It's the wax in the pipe which helps in the coloring. Meerschaum is a very porous material and a warm bowl will absorb oil and dirt from your fingers. Any dirt on the surface can be removed with a damp cloth when the pipe has cooled down. Cleaning chemicals should never be used to clean the inside of the pipe, only clean pipe cleaners.

A meerschaum is an easy pipe to take care of and if properly looked after will give the smoker a lifetime of satisfaction.

The above reprinted with kind permission of Danish Pipemakers