Mistakenly referred to in multiple works as the name of a French meerschaum carver, Au Pache is actually a misspelling of Au Pacha de Nancy, a tobacconist founded in that French city long ago and still active. They are currently located at 11 Rue St. Dizier in Nancy.

However, this is not the same "Au Pacha" famous for meerschaum in the mid 19th century and referred to by Jose Manuel Lopés below. Au Pacha was a name used by tobacconists in many French towns, and even in Geneva, Switzerland, but the "Au Pacha" known for meerschaum was located in Paris, on the Place de la Bourse. The atelier was founded in 1854 by Monsieur Lenouvel, in turn succeeded by Desbois & Weber, later to become Desbois & Cheville in 1887 and then Cheville in 1895. Finally taken over by Somer in 1900. The firm offered meerschaum pipes in many styles, including classic shapes with custom monograms and figural pipes of skulls, elephants, and many other traditional shapes. As Lopés points out below, however, their greatest fame came from the pipe "Diana on the Hunt", shown here. 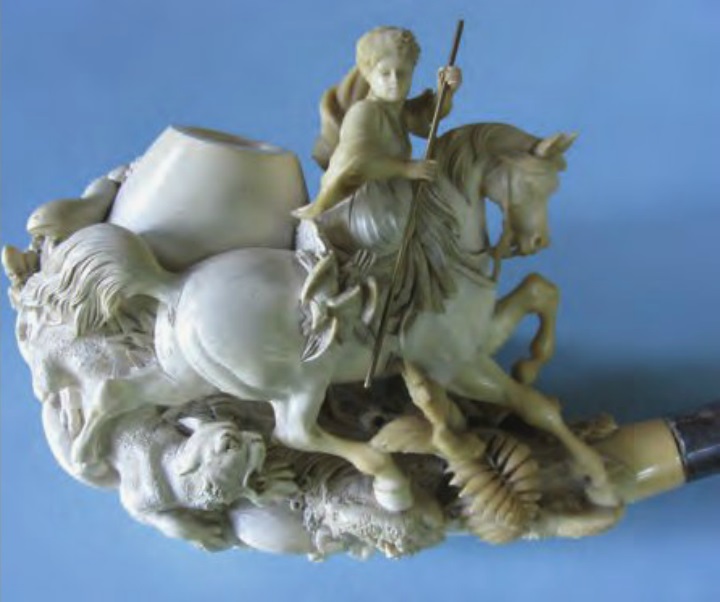 Famous French Meerschaum pipe carver, who lived in Nancy during the 19th century. His pieces are on show at museums, notably the Museum of Tobacco Art and History, in Nashville, TN (USA), where there is a pipe depicting the Roman goddess, Diana, mounted on a rearing steed, and which took Au Pache 15 years to carve (from 1854 to 1869). This pipe was to have been presented to the Austrian Emperor Franz Joseph by Napolian III, but with the outbreak of the Franco-War, in 1870, the piece remained in France until 1945, when it was bought by an North American Soldier.