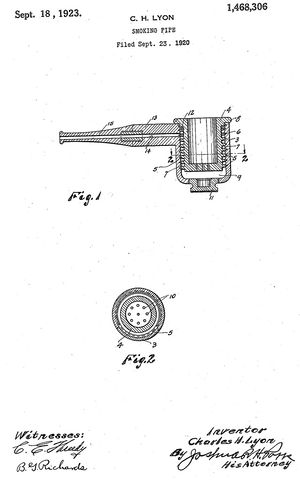 General Charles G. Dawes (August 27, 1865 – April 23, 1951) was an American banker and politician, as well as the 30th Vice President of the United States. He was a co-winner of the Nobel Peace Prize in 1925, and later in life the Ambassador to the United Kingdom. He also, of interest to pipe smokers, so incessantly smoked a Lyon pipe that his party used it as a campaign emblem and the pipe took on his name, now being referred to as the Dawes Pipe. In fact, this pipe was invented by Charles H. Lyon (February 17, 1861 - January 1, 1947).

The Lyon pipe, now more commonly known as the Dawes pipe, was characterized by an inner bowl which was threaded into an outer bowl, with smoke traveling through the bottom of the inner bowl to reach the airway much as in a traditional gourd calabash. On September 11, 1924, the Ellensburg Daily Record reported from Chicago that Mr. Lyon worked from a small tin shanty on the outskirts of Chicago, but upon Dawes' nomination for the Vice Presidency became swamped by orders for the pipe, with 75,000 orders received at that time, and a factory struggling to produce 1,000 pipes a month.

The Lyon pipe was invented by Charles H. Lyon (1862-1947) while working in his workshop in the Chicago area in the early 1920's. In late 1920, the inventor, a former millwright, was without his right arm due to a factory accident he suffered during World War I, without a job, and at 60 contemplating a start in the real estate business to feed his family. While considering his options, he thought up the pipe that bears his name, and applied for a patent for its design on September 23, 1920. The following year, having seen him smoking a pipe, Lyon sent a pipe to the General as a sampler and the General began ordering the pipes by the dozen.

The two became friends, and General Dawes used the pipe as a campaign giveaway in his 1924 campaign for the Vice Presidency, making the pipe famous. In the meantime, Lyon had been granted a patent for the pipe on September 18, 1923. It is reported in Lyon's obituary on January 2, 1947 in the Oakland Tribune that Dawes and Lyon had become partners in the production of the pipe.