Erik Nielsen is fairly new on the Danish pipe scene and is still in the process of defining his own style. He worked as an apprentice under Kurt Balleby, for about two years, where he learned all of his basic skills. Now Erik has his own workshop and makes pipes under his own name. Keep an open eye on the pipes from Erik, you get high value at a reasonably price - and his style is rapidly improving. 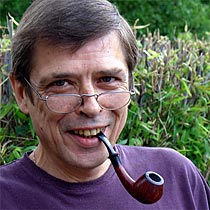 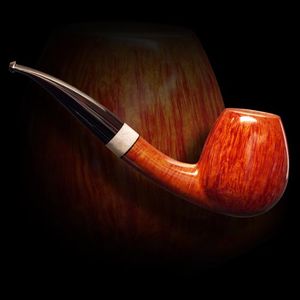 About Erik Nielsen (text by Erik) I was born in 1949, have been smoking the pipe since I was 13-14 years old, and always enjoyed it.

My father was a tailor and all in his family were either tailors or hairdressers – both occupations that call for artistic handwork. I myself have an education as hairdresser, but never performed as such.

My father was a pipe collector, and my brother too. So of course I was hit by the same flame and have around 300 pipes in my personal collection.

In the time from 1980-2000, I was working for the Danish Railroad (DSB), but an accident at work stopped that. I have always wanted to make my own pipes and one week before the accident I bought some old pipe maker equipment along with a friend. Fate made the accident my opportunity. 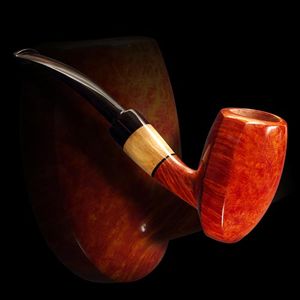 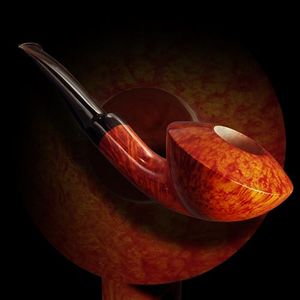 The first pipes I made was fantastic – well, in at least I thought so myself... I was carried away and spent all my time in the little workshop with the old tools. My wife was very patient, although I think she thought I was going crazy.

The work was very good therapy after the accident that had caused both mental and physical problems and I was not able to return to DSB again.

One day I met Kurt Balleby and he vas so kind to invite me to visit his workshop. I brought some of my best pipes that I proudly showed to Kurt. Kurt smiled, and told me very politely that it was some of the better pipes he had seen – of “that kind”. He gave me some good advice and I understood that I had a long way to go yet. Filled with new hope and enthusiasm, I went home and continued to work, now with the advice from Kurt in my mind. 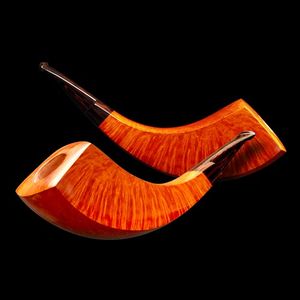 After the accident I had to be retrained in order to obtain another career and was helped financially by the local social office. Fortune (and the kindness of Kurt Balleby) gave it, that Kurt could now train me for one and a half year. Being in his workshop every day I slowly grasped what pipe making was about, and my pipes became better and better day-by-day.

Kurt suggested that I went along with him to the Chicago Pipe Show (in 2003) and, frightened to death, I agreed to do so. I brought the 24 pipes I had made so far – and I sold all of them. Believe me, I was exited. Now I was a real pipe maker....

I decided that pipe making really was my new career – and have never for one minute regretted that decision.

I still have a lot to learn, but with the help and guidance from all my new friends among the pipe makers – Tom Eltang, Peter Hedegaard, Kai Nielsen, Poul Ilsted and many more, I will slowly get there – thank you, my friends.

My life has changed. In my spare time I bike in the nature, listen to music and along with my wife I enjoy concerts with among others Eric Clapton and Paul McCartney. Life is good.

One of the greatest experiences I have had lately is to become a grandfather. My grandchild “Rasmus” already has his first pipe (you get a little insane having a grand child).

My goal is to make better pipes all the time and I will work hard to reach that goal – inspired by the saying of Tom Eltang: “It’s good to be a pipe maker”.

Thank you for your time.

An excellent selection of Erik Nielsen pipes is available at Pipedia Underwriter, lepipe.it