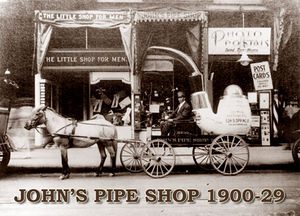 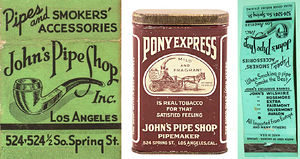 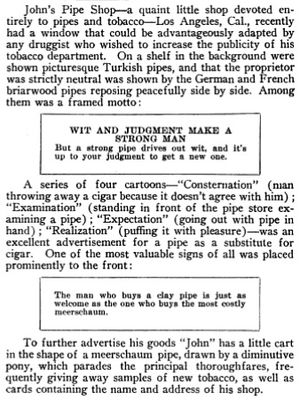 An article about John's Pipe Shop, which was included in Volume 64 of the American Druggist and Pharmaceutical Record in 1916.

About a year ago I came upon a flea market 25th St in Manhattan. A young man had his table set up and he had a large number of very distinctive looking pipes. I took a look and saw that almost all of them were marked "John's Pipe". The grain was very nice and the carving was very interesting, most being in the free hand realm. These pipes were sizable. The one drawback as I saw it was all of these pipes had pits or mars in the briar. But the styling on these pipes was very interesting.

John’s Pipe Shop from Los Angeles was open for decades, starting in 1908 and looks like into the 1980’s or a little longer. They had pipes made for them by European companies, one of which is Comoy’s for sure. As seen on their matchbook cover ad their “Exclusive Brands” included Wilshire, Rosemore, Extra, Fairmont, Silvermont and Avalon. There were two shops, one at 524-524 1/2 S. Spring St. in the heart of downtown early Los Angeles, and the other at 6725 Hollywood Blvd, Hollywood 28, Calif. I’ve found old matchbook covers with that info and a photo of their horse drawn carriage with a large pipe bowl on the back as an advertisement. The photo was from the 1900-1929 timeframe.