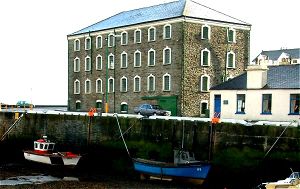 Laxey Pipes Ltd. resided in a historical 19th century four-storey Man stone building at The Quay, Old Laxey, Isle of Man, which thankfully has been preserved.

The company specialised in the production of meerschaum pipes using the Meerschaum mined by the Tanganyika Meerschaum Corporation in the Amboseli basin in Tanganyika (since 1964 part of the United Republic of Tanzania).

Please note: you may often find names like "Manx Pipes Ltd.", "Man Pipe Co." and others more, but there is no indication of another Isle of Man pipe producer other than Laxey Pipe Ltd. at any time!

Laxey Pipes Ltd. marketed own brands like "Manxpipe", "Manxman", "Manxland" e.c. Names like "John Bull", "White Knight" (unwaxed), "Domino" (black, or lined) indicated some shapes / colours of Laxey's own series. The stems either showed the astronomical sign for "male" or "man" (circle + arrow), or the crest of the Isle of Man, the 3-legged X in a circle. Manxpipes and Laxey's other brands were available through pipe retailers in general, but also were sold (mainly) to tourists through their own shop in Laxey.

Furthermore Laxey Pipes Ltd. manufactured the meer bowls for Peterson, Barling, Nørding and others from the later 1960's until 2001. Man Pipe e.g. was a brand distibuted by Comoy's. The bowls usually showed no nomenclature indicating the orderer. "Genuine Block Meerschaum" was engraved frequently. Often, just the stems were different, while bowls were the same.

Supply of meerschaum from East Africa run out (Kenya / Tanzania exhausted, Somalia inaccessible), and thus the last Laxey meers were supplied to trade in May, 2001. Laxey Pipes Ltd. tried to survive continuing with briar pipes - mainly in the Danish style -, but to no success. It closed down business in July, 2002.