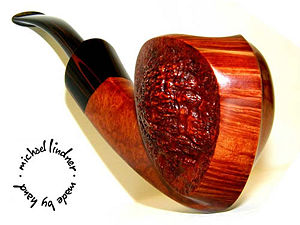 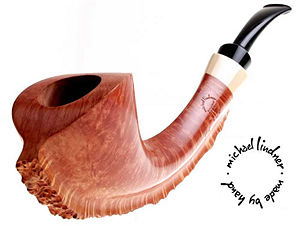 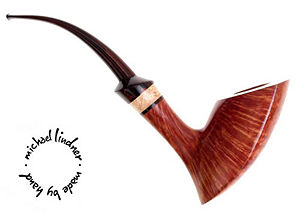 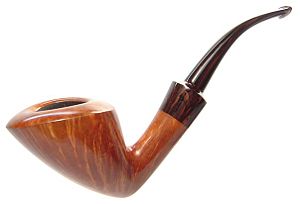 A Quick and Dirty Biography

My name is Michael Lindner. I was born and raised near Detroit, Michigan, where I still reside. I am pretty much self-taught when it comes to pipemaking, although there have been some notable makers who were kind enough to supply information and encouragement when I first started (namely, Jimmy Cooke, who taught me some basics about setting up machinery; John Eells, who encouraged me early on to "do things right"; Trever Talbert, who gave me insight on equipment and tooling; and Paul Bonaquisti, who has given me advice on anything from bowl coatings to choosing the right lathe.) I have a background in fine art, commercial art, and design, as well as business administration.

Growing up in Detroit can have an effect on a young, impressionable young man. My father was a senior draftsman for General Motors and the love of the automobile is in my blood. At a young age, it was absolutely amazing to me how something so utilitarian could evoke such a strong emotional response if properly styled. As I grew older, I realised that it was the human element that made a car sexy, or masculine, or elegant. It was the designer's imagination and skill which determined how another person would respond, how it would make them feel. The fact that another person could create an object that would make my heart race just looking at it fascinated me. At that moment, I knew I wanted to be a car designer.

Unfortunately, by the time I turned 16 or so, my rebellious nature had firmly taken hold and I found myself exploring the grittier side of Detroit - punk bars, abandoned factories, burned-out neighborhoods. In the 1970s through the 1980s, Detroit was a place full of chaos and darkness, but there was beauty in it all. Industry itself is an art form. I grew to love the elegant Art-Deco architecture, covered in grime, or the field of wildflowers with a burned-out house plunked down in the middle of it, as though it were tossed from the skies and landed right-side up. Living in Detroit changes you; it makes you appreciate beauty when you find it. You look for it and try to hold onto it, like chasing a Guards Red Porsche down the expressway in January, because your eyes are feasting on a colour other than the non-stop grey of the skies. You ultimately try to create it yourself. I never did become an automotive designer, but my love for the sensual forms and exacting precision of good automotive design lives on in the pipes I create. Yeah, But, How'd Ya Start Makin' Pipes?

The route to pipemaking was a long winding one, and frankly I wasn’t even thinking about making pipes when I bought my lathe and set up my shop. It just kind of happened. I was already in “the business”, having founded The Piperack in 1997, and by the time 2000 rolled around, the plan was to incorporate full repairs and restorations into the business – hence the lathe. On a whim, I picked up some briar from Mark Tinsky, looked at the side of one of the blocks… and saw a pipe inside. It just kind of happened that way. Pipemaking came very intuitively to me – it almost felt like it was something I always knew how to do, but just needed to do it once to remember how. Making pipes appeals to my exacting, precise nature as well as my artistic drive to create sensual forms. It allows me to blend the two sides of my brain and open up my soul to the world, one pipe at a time.

The connection between smoking and spirituality has already been well-documented; one need only look at the native Americans to see strong examples of this (although this is only one of many). However, as a pipemaker I have become acutely aware of a strong connection to spirituality in making pipes. When I am working on my pipes, when I’m “in the zone”, it’s very similar to the peace one feels when meditating – my mind becomes still, my focus becomes singular, and I “let go” of all external influences. It is a time of rejuvenation and introspection. Pipemaking becomes an opportunity to connect with nature – I connect with the briar and the earth it came from, I connect with the mastodon that died 25,000 years ago and gave up its ivory, I connect with the tree that was felled for the Box Elder used for the inlay. This is why I use “natural” materials such as vulcanite and avoid artificial materials when at all possible. Even the styling of many pieces is influenced by nature – the Blowfish being one example, or pipes from my "Flower" series like the Ladyslipper or the Calla.

It’s this connection to the materials that allows the pipemaker to give something of himself to the pipe he makes. Making pipes allows the pipemaker to “infuse” a bit of himself into each piece. Having been a collector long before being a maker, I wondered why there’s just something about, say, a Jess Chonowitsch, or a Tinsky. Why, all other factors being equal, we just prefer to smoke a pipe made by a certain man? Is it the wood? Any good maker ages their wood properly, and utilizes wood from a reliable source. Is it the engineering? A look at any number of brands – from mid-line to high-end – will show that engineering can be all over the map from mediocre to perfect. So why do we as collectors prefer pipes from Ulf instead of Per, or Teddy instead of Lars? Because each pipemaker brings something beyond styling, beyond engineering, beyond materials, to the pipes they make. They bring a little bit of themselves.

Useless Information I'm Sure You're Dying To Know

This will ramble a bit, but it’s all important in the big scheme of things. I make about 100 pipes a year. My briar source is Mimmo – a fantastic friend and also the same source for Teddy Knudsen and many other great makers. I age my wood for about three years, and I allow it to experience the seasons – it allows the wood to learn to take in and give up moisture naturally. My rod stock is from Germany – I never use stem blanks. I do all my own sandblasting. My ivory is mastodon from Canada – it’s been dead long enough. All my pipes will pass a pipe cleaner without ramping the airway – ramping messes up the airflow (in my opinion.) I don’t take myself as seriously as you may think – it’s all about having fun. My favorite music to listen to when working is Electronica (Paul Oakenfold is a favorite) or Jazz (the real deal, Dexter Gordon, Hank Mobley, Sonny Rollins... none of that Kenny G crap). Life shouldn’t be lived without involving dogs in some capacity (eating them doesn’t count). When I want to get away, nothing compares to Traverse City in October. We all need some way to express our creativity to truly be whole.

In the summer of 2015, Michael joined Nate King and others in the formation of the Briarlab in Indianapolis, Indiana.