From Pipedia
(Redirected from Reis)
Jump to navigation Jump to search 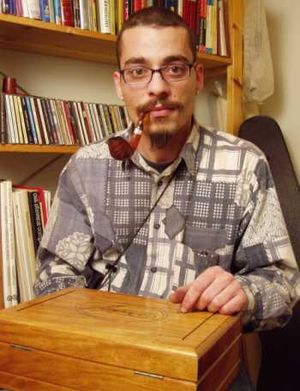 Joao carved his first pipes in 1998, using very few tools, but it was evident in the beginning that Mr. Reis had talent. At this point in time, Joao was working primarily as a cabinet-maker, having always been skilled in woodworking. From there, his evolution has been rocketing skyward. Mr. Reis surely belongs in an exclusive pantheon which includes some of the best young pipe carvers in the world. His potential is unlimited, and title of Grand Master is only a matter of time ...

Joao Reis was born in Lisbon, Portugal on June 22 of 1978. As many pipe afficionados will tell you, there are very few, if any, pipe carvers resident in Portugal. So how did Mr. Reis and pipe carving join to make such a perfect bond? For one, woodworking was a passion that Joao obtained at a very early age. He started his career as a cabinet-maker at the age of fifteen. It was also about this time that Joao's love and fascination with pipe collecting began to materialize. He became a member of the Cachimbo Clube de Portugal (Pipe Club of Portugal). From there, it was only a matter of time.

It was in 1998 that he first made a pipe for a friend of his at the Cachimbo Clube de Portugal and continued from there making pipes, although without a vast majority of tools of the pipemakers trade.

In 2004, Joao's work first appeared at the Chicagoland International Pipe & Tobacciana Show where his meteoric talent was in full display. After word spread and Joao's skills continued to be refined under superior tutelage, it was only a matter of time before this artisan could be called one of the best young pipe carvers working today. Today, Joao carves about 150 pipes a year in just about any shape, freehand derivitave, or wholly unique creation. He also uses a number of inserts on his work as well as a variety of different finishes and different stains.