Peter Fischer was born in 1949 in Schleswig-Holstein, the utmost northern part of Germany. After he had finished a commercial apprenticeship he bought a one way ticket to Hamburg where he trained some seamanship for a while. Aged 21 he hired as a paymaster on a cargo steamer and traveled the seven seas for the next three years.

From the oceans to the mountains - Fischer settled down in Switzerland. After he had watched the demonstration of an old Helvetian pipemaker at an exhibition in Winterthur he was motivated to give himself a try in this craft. So he rented a small shop in the ancient part of Schaffhausen in 1975 and began dedicating himself to pipemaking. After modest and laboriously beginnings with pre-drilled blocks he soon realised that this way wouldn’t lead too far. He invested in appropriate tooling and better wood and began to make pipes in an artistic way. 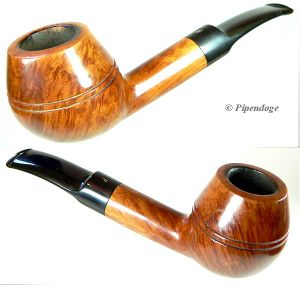 Apart from manufacturing his pipes he worked as a barkeeper for many years in a popular Schaffhausen jazz and rock tavern. Fischer wanted to stay independent of the absolute must to market his handicraft art because living on pipemaking. He felt aware there was some danger to be corrupted otherwise by dependence and thus fulfilling the demands of market.

If we don’t count the pipes Fischer made for fellow pipesters of German internet newsgroup d.a.f.t.de each piece from his hands is unique, as he never manufactures the exactly same shape twice. Fischer's briars represent a class of their own in their finish and precision. They typically follow the classical pipe forms creating new variations over and over again. Not each briar is suitable for a Fischer pipe, which has not only to be beautiful but also must have outstanding smoking characteristics. The origines are mainly from Greece and from the region of the Ligurian coast. From each lot supplied Peter Fischer first chooses one block making a pipe for himself to test the quality. Due to this practise already more than 300 pipes make up a very special collection.

Fischer loves to decorate his pipes with unusual materials. Mother-of-pearl, jewel, amber, ivory and bone applications ornament not only the stem but sometimes also the bowls and mouthpieces. To develope some even more whacked out creations he went into co-operation with a juwelier. For sure not every pipesmoker will appreciate such funky pipes but indeed, Peter Fischer already manufactured many smoke devices with platinum and diamond ornaments demanding prices with 5 digits. His customers are mainly homed in Europe but he has warm admirers in America and in the Far East as well.

Peter Fischer is a very warm hearted and nice to talk to character. Besides doing all kinds of repair and service work on pipes his workshop is a meeting place of passionate fly-fishers who buy their Fischer made flies and streamers there.