Some people seem to know how to do everything; when they start making something the result is always good. Lars-Göran Markunger (*1960) in Halmstad is that kind of a person. He has drawn and built his house and an older house, which was on the lot when it was bought, he has renovated and made into a workshop. When I was walking around in his beautiful house, I saw many beautiful things and when asking, I often got the answer that Lars-Göran had made it himself. In the hall there was a picture of an Alfa Romeo that looked completely real, but it was a model Lars-Göran build for his son many years ago. It was driven with an electric engine and the boy could drive it around the garden. I did not find out for sure if Lars-Göran himself was a golfer, but he had made a fantastic putter that must be a dream for an enthusiastic golf player. A friend who was with me when I visited Lars-Göran is a golfer, and he was very enthusiastic about it. 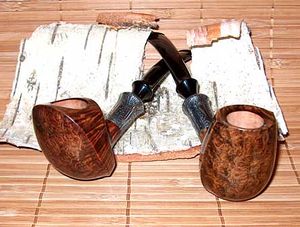 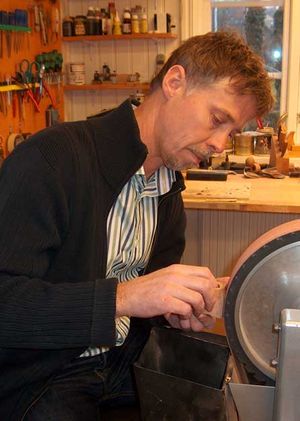 For a living Lars-Göran is working in a glass factory. So glass is his profession, but it is difficult to find any material that is not familiar to Lars-Göran. And he finds it thrilling to combine materials, and just that made him interested in making pipes a few years ago. At that time he did not smoke a pipe at all, but enjoyed an occasional cigar. So Lars-Göran is not a heavy smoker, but nowadays he often smokes a pipe instead of a cigar. “But”, Lars-Göran tells me, “my father, who is now 87 years old, is an inveterate pipe-smoker. He is from the old school and wants his pipes to be well broken in, so that there is just a small hole left for the tobacco. I have made a pipe for him, but he is always complaining that the tobacco chamber is much too big”. 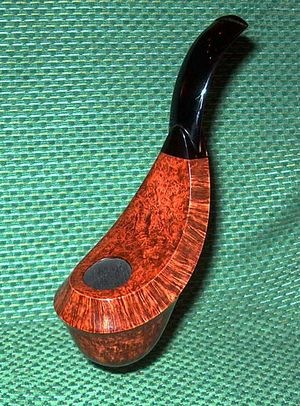 It was an article in a newspaper about a French pipe factory that made Lars-Göran interested in pipes. To combine ebonite and briar and to work with a beautiful wood like briar seemed fascinating. When, in addition, a good friend enthusiastically told him about a program about pipemaking he had watched on the TV (it was a program about Bo Nordh), Lars-Göran had made up his mind to try for himself.

Lars-Göran made two pipes and took them to Bo Nordh. Bo was, which was not unusual, hard in his criticism, but he also gave much advice. Evidently Bo realized that he had met a talent and that he perhaps had been too hard in his criticism, because a week later he called Lars-Göran and told him to make a few more pipes and come back and show them. Lars-Göran did so and now Bo was much more positive, almost enthusiastic: “That is something”, he said, “make a dozen pipes and give them to Per Billhäll.” Bo knew that Per had the right contacts and the best possibility to make the pipes known. This proves that Bo thought that Lars-Göran had the necessary qualities to become a really good pipemaker. 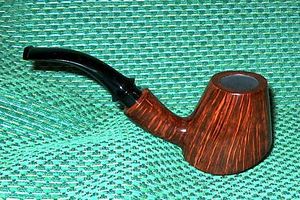 We went out to Lars-Göran's workshop, situated in the old house that he had renovated. It is unusual to see a workshop with such a perfect order as it is here. Every tool has its special place and all materials are perfectly organized on the shelves. We had already found out, but here is another proof that Lars-Göran is a perfectionist. In that sense we got the same feeling here as in Bo Nordh’s workshop. Lars-Göran has constructed many of the machines himself, and that is a thing that has always fascinated me when visiting pipemakers. Almost everyone has found his own solutions and made or adapted the machines and tools to his own specifications. One reason is of course that there are very few ready made machines and tools to buy, but another reason probably is that most pipemakers are true individualists.

When I look around in the workshop I see one thing that is missing, a lathe. Lars-Göran says that it is number one on his wish list, but until he has found one, he uses the lathe of a friend of his.

I mentioned earlier that Lars-Göran is used to work with a lot of different materials. One of them is Damascus steel, which he has used on some of his military pipes. Lars-Göran explains how it is made, and I can assure you that it is a complicated process with many steps. I shall not even try to tell you all about it, just that two types of steel are processed together. In the final step it is boiled in hydrochloric acid, where it gets its beautiful pattern.

Another odd material is birch bark, which Lars-Göran had used in the shank of two of his pipes. He uses birch bark from the very northern part of Sweden, the only one that is thick enough.

A Deck of Cards 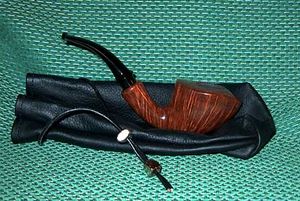 To color a pipe beautifully is always a problem and a constant subject for discussions among pipemakers - especially nowadays when many of the stains earlier used have been forbidden for environmental reasons. Lars-Göran is using acids instead of stains and he demonstrated one of them on a piece of briar. When the acid was applied on the briar it was colorless, but when it was heated with hot-air it became completely black. A fascinating process!

Lars-Göran is using a deck of cards to grade his pipes. The cards “10” to “Ace” are used, so a “Q” means Queen and is the middle grade. Like many other pipemakers Lars-Göran is not using an ordinary stamp but an engraving machine.

Some of Lars-Görans pipes are sandblasted and for that, he is using a sand blaster at his work in the glass factory.

But why are the pipes stamped “Gurra”? Well, here in Sweden Gurra is not an unusual nickname for Lars-Göran, and so has Lars-Göran been called from his youth. When he had to decide how to stamp his pipes, he realized that if he should use his whole name, he had to make very big pipes to find place for the stamp. So Per Billhäll suggested that he should use his nickname, an idea that Lars-Göran immediately took in.

Until now, Lars-Göran has only made about 25 pipes. It is hard to believe that anyone in such a short time can come up to the perfection he has achieved, but, as told before, Lars-Göran is a perfectionist and when he started, he was not a beginner when it comes to handicraft.

I am looking out through one of the windows in the workshop. It really is a divinely gifted place Lars-Göran and his family are living in, situated just outside the seaside resort of Tylösand and a few hundred meters from the sea. Next time I pay him a visit, I will do it in the summer, and then I will certainly bring my bathing trunks.