Meissen porcelain was the first European hard-paste porcelain. The Chinese had mastered the production of porcelain long before the west was even aware of it, and by the seventeenth century oriental porcelain, in Europe was called white gold and had become a valuable export commodity in the China trade. In Europe owning porcelain from China and Japan signified importance, refined taste, and great wealth. 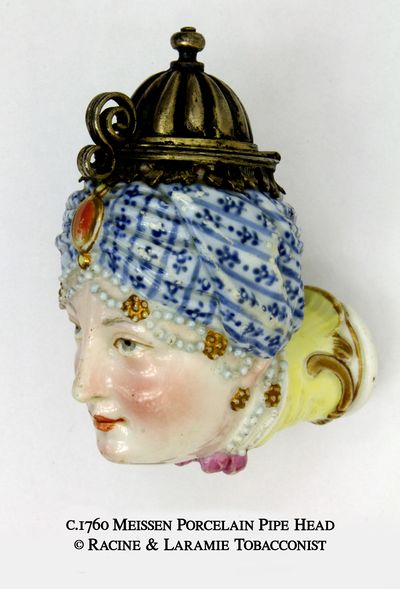 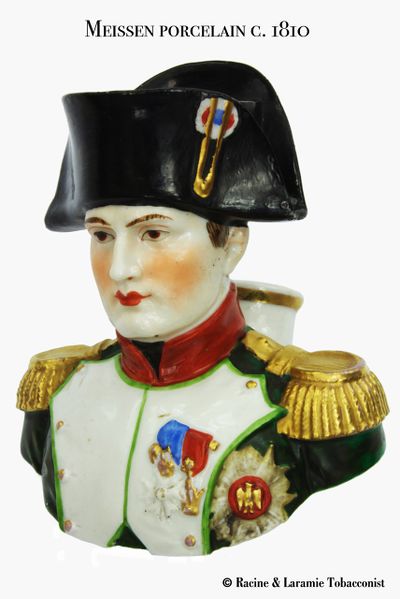 Circa 1810. On the bottom is written "Vive la France!". Courtesy Racine & Laramie Tobacconist

At the beginning of the eighteenth century Johann Friedrich Böttger pretended he had solved the dream of the alchemists, to produce gold from worthless materials. When Augustus II the Strong - well known for his insatiable hankering for gold heard of it he imprisoned Böttger in a dungeon and ordered him to make gold. Böttger toiled away many years, at many a noxious concoction, attempting to produce the 'gold making tincture' and, therefore, to regain his freedom. At the same time, Ehrenfried Walther von Tschirnhaus, a mathematician and scientist, using a burning glass was experimenting with the manufacture of glass as well as trying to make porcelain. In 1704, impatient with no progress, the monarch ordered Ehrenfried Walther von Tschirnhaus to oversee the young goldmaker. At first Böttger had no interest in von Tschirnhaus' experiments, but with no results of his own and by then fearing for his life, he slowly started cooperating. He did not wish to be involved with porcelain, but ordered by the monarch and probably thinking the deciphering of porcelain's secrets his only option left to both satisfy the monarch's greed and save his own neck, by 1707 he began cooperating in earnest.

Presumably by involving Böttger in his experiments, von Tschirnhaus spared him the fate that overtook many former alchemist adventurers. When Tschirnhaus suddenly died, the recipe apparently was handed over to Böttger, who within one week announced to the King that he could make porcelain. Böttger refined the formula and with some Dutch co-workers, experienced in firing and painting tiles, the stage was set for the manufacturing of porcelain. In 1709, the King established the Royal-Polish and Electoral-Saxon Porcelain Manufactory (Königlich-Polnische und Kurfürstlich-Sächsische Porzellan.Manufaktur), placing Böttger's laboratory at Albrechtsburg castle in Meissen and production started officially in 1710.

The first type of porcelain produced by Böttger was a refined and extremely hard red stoneware known in Germany as Böttgersteinzeug. It retained very crisp definition in its cast and on applied details. The Bottgersteinzeug could be polished to a gloss before firing. Models were derived from Baroque silver shapes and Chinese ceramic examples. Meissen's production of a hard paste white porcelain that could be glazed and painted soon followed, and wares were put on the market in 1713. Multicolour enamelled painting was introduced by Johann Gregorius Höroldt in 1723, with an increasingly broad palette of colors that marked the beginning of the classic phase of Meissen porcelain.

The following Bottger pipe was early production and not the later perfected hard paste porcelain. The pipe was made of reddish-brown Bottger stoneware in holland form with a fixed tube (without mark), manufactured by Meissen circa 1712, long approx. 27 cm. gold-plated silver mount: collection D. David, Kopenhagen.

Note: According to a Meissen documentation of the time around 1712, "tobacco pipe heads and whole pipes" were also offered. Assumption: Probably made by the pipe maker Johann Muller. courtesy Racine & Laramie Tobacconist

The Tobacco pipe pictured above was made of reddish-brown Bottger stoneware in holland form with a fixed tube (without mark), manufactured by Meissen circa 1712, long approx. 27 cm. gold-plated silver mount: collection D. David, Kopenhagen. Note: According to a Meissen documentation of the time around 1712, "tobacco pipe heads and whole pipes" were also offered. Assumption: Probably made by the pipe maker Johann Muller.