In the fall of 2009 we heard the announcement that the Stanwell pipe-factory in Borup, Denmark, would close its doors at the end of that year due to poor returns and financial losses. Indeed a sad message, especially as Stanwell was the only remaining pipe-factory in Scandinavia. However, it did not mean that the Stanwell-pipe was dead but the owner, Scandivaian Tobacco Group (STG), had decided to move the production to Italy. So beginning in 2010, all Stanwell pipes are made there.
Of course we did not want this to happen, but we have to accept it, and hopefully the high quality of the pipes Stanwell makes will remain in the future. And most important of all--the cooperation with Danish pipemakers to create new shapes will continue. Due to that cooperation Stanwell has played an important role in the development of Scandinavian pipe-making, and it is a comfort to know that it has not come to an end. Scandinavian Pipemakers, Jan Anderson, 2012, page 15

Please feel free to contribute to this article, before or after, but do not edit or delete the text credited to Smokingpipes.com. Thanks, --sethile 20:18, 31 August 2009 (UTC), Pipedia Sysop. 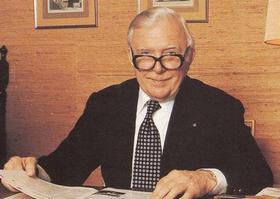 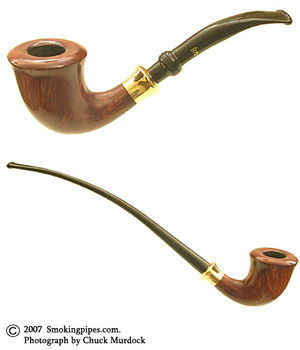 When pipe smokers talk about pipes that are consistently great smokers, exhibit the creative and beautiful designs that exemplify Danish pipemaking and offer the best value in factory produced pipes, they are talking about Stanwell. We hear time and time again, from customers and top pipe makers from around the world, that Stanwell is the best factory produced pipe in the world. Stanwell maintains the most modern pipe making facility in the world and for many years has enjoyed some unique relationships with many legendary Danish pipe makers. In fact, Stanwell occupies a pivotal place in the history of the world-wide popularity of Danish-made pipes. During WWII, Danish pipe smokers could no longer buy the English made briar pipes they preferred to smoke. In 1942, because of the unavailability of English pipes and raw briar, Poul Nielsen began making pipes from beech wood for Danish customers. At the time, Poul was managing a company called Kyringe, which made various wood products. 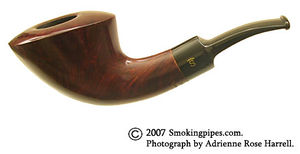 At the end of the war, briar became available again, so Nielsen began importing his own briar and started making briar pipes to compete with the English manufacturers. It must be remembered that in 1948, England was the single great center for pipe making. Therefore, Nielsen changed the name of his pipes to "Stanwell", which sounded much more like a proper English name than "Nielsen". He also created the horse drawn carriage logo for its English connotations. He later changed his own last name from Nielsen to Stanwell, a testament to his devotion to the pipes he made. Stanwell's relationships with Danish pipe makers goes back to Sixten Ivarsson, who is considered the originator of modern Danish pipe making. Ivarsson was commissioned to design Stanwell shapes. In 1969, the factory was moved a town called Borup, just outside of Copenhagen to be closer to Ivarsson. 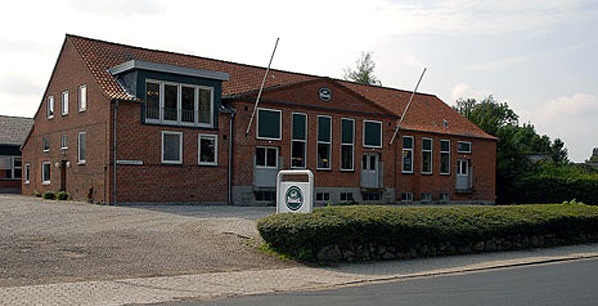 Stanwell revolutionized the pipe world with his new factory; until its debut, very few pipes were exported from Denmark. It was the Stanwell factory that first began mass exportation of Danish pipes and first whetted the appetites of Americans and Germans for the Danish pipe. Today Stanwell produces around 300,000 pipes annually. Stanwell relies on designs from the great Danish pipe makers, from Sixten Ivarsson to Jess Chonowitsch from which they create their hundreds of shapes. Since most sandblasting for Danish pipemakers is done at the Stanwell factory (Stanwell has a reputation for excellence in sandblasting that is used by many, many Danish carvers from Poul Winslow to Jess Chonowitsch), many of the pipes that they sandblast are then observed and used as starting points for Stanwell shapes with the consent of the original carvers. This interesting and unusual symbiotic relationship gives Stanwell the opportunity to offer hundreds of unusual and interesting shapes at an affordable price. 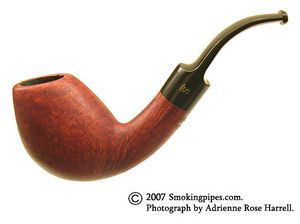 Once a new shape is established and hand carved, it is then reproduced using a lathe. Following the initial carving of the pipe which is done by machine, all other processes are done by hand, from the final sanding and staining to the application of the wax finish. There are approximately 120 manual steps to Stanwell's pipe making process. The Stanwell factory is arguably the most efficient pipe operation in the world. It is this efficiency that has made Stanwell so remarkably price competitive and able to offer pieces of superior quality to those created by other large factories.

Essentially the goal of Stanwell is, and always has been, to produce high quality pipes at a price that is truly within the reach of the common man. In this they have succeeded admirably, offering perhaps more pipe for the money than any other pipe manufacturer in their price range. Stanwell pipe offers exceptional quality at a remarkably affordable price. Today it often seems that there are few options in between low cost, very low quality pipes and the handmade pipes that fetch hundreds of dollars. Stanwell manages to fill this void commendably by offering pipes close to the quality of the handmade with prices that are only slightly higher than drug store pipes.

Stanwell pipes are a must for any pipe collection. The Stanwell name is a cornerstone of Danish pipe making. In owning a Stanwell, you will not only enjoy beautifully styled, great smoking pipe at a great price, you will own a piece of pipe making history.
This is the end of smokingpipes.com material 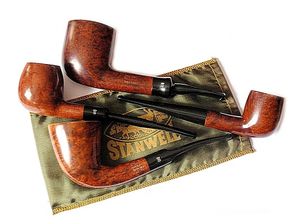 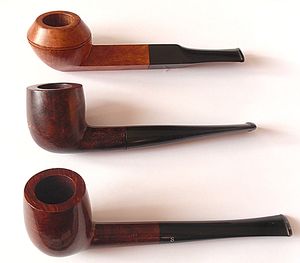 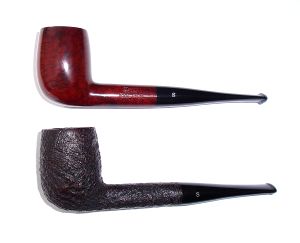 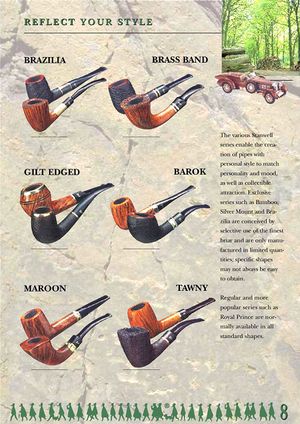 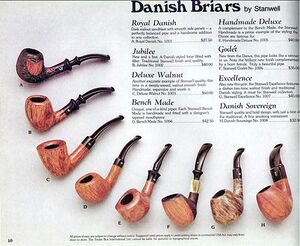 The following is a link to a complete early 1950's catalog File:Stanwell1.pdf here on Pipedia, and several example pages, courtesy, DanishPipeMakers.com:

The following is a link to a complete late 1950's catalog File:Stanwell2.pdf here on Pipedia, and several example pages, courtesy, DanishPipeMakers.com:

Off site links to Catalogs 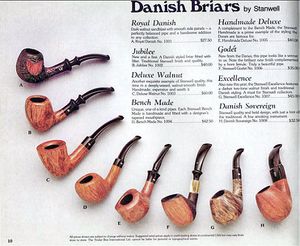 More Information on Recent Grading (through to mid 1990s):

This line of Stanwells was manufactured in the early to mid 1980s and was part of their “Specialty” line.They were priced approximately 2.5 times more than the top-of-the-line Silver S series. What sets these pipes apart from the Silver S series is that the mouthpieces were made of Cumberland rod. Not only that but, the mouthpieces were hand-cut by the likes of Tom Eltang, Peter Hedegaard, Jess Chonowitsch, etc.,the handmakers, for each individual pipe in their own shop. The Hand Cut series was available in both smooth and a blast finish. The underneath of the stem is stamped “hand cut”; the stem carries the Stanwell crown over S logo in brass. The shank is stamped “Stanwell” over “Made in Denmark”. It should be noted that none of these pipes had a Stanwell shape number stamped on the shank, as is the Stanwell tradition.

Do you remember the Silver S - Stanwell's very finest line until they were discontinued some 10 years ago. No nonsense pipes with great wood and an almost natural virgin finish. And obviously fitted with the famous silver S in the stem.

An old series. The blocks are cut on the cross grain. The pipes from this series exhibit Birds Eye grain only. Brass band and brass S in the stem. The pipes have a two-tone staining which really shows the beautiful bird’s eye grain. However, this staining simply takes too much work so the series is discontinued.

All of the Stanwell Bamboos made during the 1970s were crafted by a Mr. Larsen. He sometimes, in order to unify bamboo and bowl-shape, gave the pipes a freehand touch. (Søren Lundh Aagaard, Managing Director, Stanwell – email of 08-05-16)

Bamboo is probably the best-known of Stanwell's pipes. The bamboo shank gives an extra dry smoke andwill darken when smoked. Good wood with excellent sandblasting or smooth with beautiful grain. Most of the smooth pipes are golden light brown and a few are darker brown.

Brass Band is one of Stanwell's older series - fine pipes with deco of 2 brass rings separated with a ring of Cumberland, and brass S imbedded in the stem.The series is no longer made.

Free Style is the name we are using for individual pipes, either in shape or in finish, made by our internal pipemakers. During the year they are making a lot of experiments with finishes and rings etc.“When we don't need these samples any longer we sell them. We group them in 3 categories: A, B and C. A being the most expensive and C the least expensive”.(info rec’d from J.G., 05-11-21)

This is a Stanwell 2nd that was marketed only in the United States and Canada. This line has 3 “X”s, no more, stamped on the mouthpiece. (email 06-05-19)

Ivarsson shapes, especially when they were sold to Japan, were stamped in this way. Ivarsson had a very good and special reputation in Japan. (email 06-05-19)

This series is comprised of the Rook, Queen, King and Bishop. The production of the Chess series was originally overseen by Johann Larsen. This job is now being done by Poul Winslow.

An excellent selection of Stanwell pipes is available at Pipedia Underwriter, lepipe.it

The Specialty Series is comprised of eleven different shapes: