Siro Taioli is sometimes mentioned as a pipemaker or - at least - a pipedesigner. In fact, Taioli is the Spanish distributor of Pipa Croci pipes made by Paolo & Gianni Croci, Mantova in ItaLy. And so, he has private label pipes stamped with his name. It's that simple!

His probably most spectacular project was a line of nine pipes dedicated to Hughes de Payns, Geoffroi de Saint-Omer, Andre de Monbard, Gondemare, Geoffroi Bisol, Godefroy, Roral, Payen de Montdesir and Archambaud de Saint-Agnan - the founders of "The Order of the Poor Knights of the Temple of Jerusalem" or simply Templar Knights.

The Templar pipes rest in a precious wooden casket clad with velvet. At the shank's end is a ring of gold, on which the cross of the Templar knights is mounted in red gold. To every pipe, there is a certificate. Price ca. $600.00. 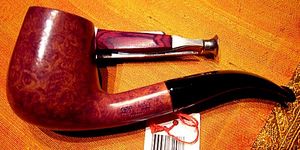