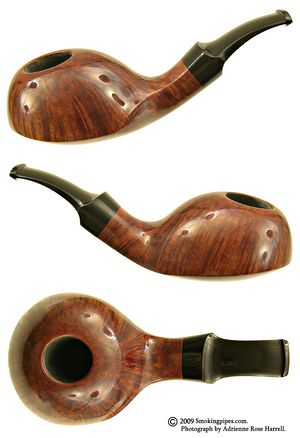 Fukashiro Tsutomu is a Tokyo homed pipemaker. His brand "Tsutomu" is widely known and well-respected in Japan due to his larger output of appr. 600 - 700 pipes per year. So Tsotumo san's pipes are much more on the spot than Satou or Tokutomi with their very limited production. What differs him furthermore is the fact that he covers a much broader price spectrum. Though he makes high-grade pipes, his prices start at a level affordable to a wide public with the less expensive pipes predominating. The bulk of his pipes are marketed and sold by his brother, who operates one of Japan's biggest pipe shops. 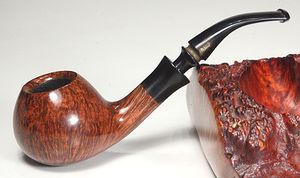 Tsutomu's sense of style is strongly a very Danish one - in fact, not knowing the carver many would surely suppose to hold a Danish rather than a Japanese pipe in hands! Some of his models strictly refer to the Danish "reformed shapes" from the 1960's. - Outside of Japan Tsotomu's pipes are hardly seen though attempts were made to introduce them to the US market some years ago. Maybe, because they don't look Japanese enough?

Beside the "Tsutomu" brand there is also a "Fukashiro" named line of pipes. Among them a range of pipes finished in the famous Japanese lacquer painting technique. Tsutomu is also reported to have made an affordable line of pipes under the Roland brand.