From Pipedia
(Redirected from Upshall)
Jump to navigation Jump to search 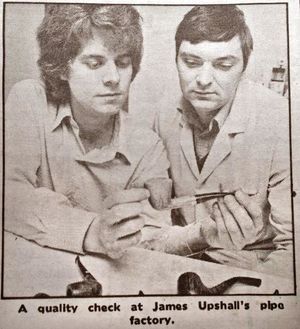 Note: Ken Barnes, co-founder of James Upshall passed away unexpectedly in April of 2021. He had recently started making a limited number of pipes in Cornwall, England, and had been reconnecting with many collectors and former colleagues in the pipe world. He will be greatly missed.

All our pipes are individually created by a team of highly skilled artisans, headed by Mr. Barry Jones, who is widely regarded as one of the best pipe carvers in the world, with more than 50 years experience in pipe making. 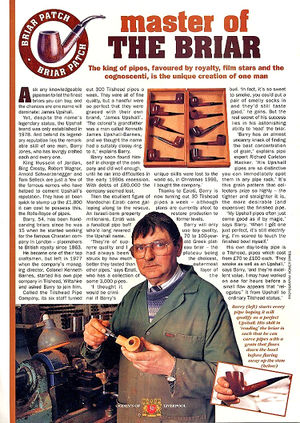 Barry Jones in the photo, and an interesting article, courtesy Doug Valitchka

Mr. Jones learned his skill from the age of 15 in London and was personally guided by Mr. Charatan of Charatan Pipe Co., pipe makers to royalty since 1863. For years he was responsible for creating the majority of the famous Charatan shapes and the high standard of quality. 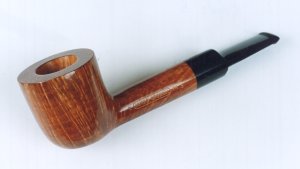 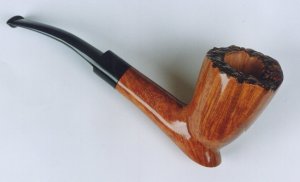 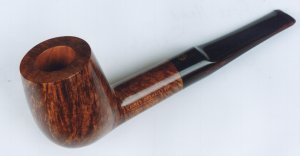 In 1978, Barry Jones joined Major Kenneth Barnes, then Charatans' managing director,and his son Kennedy Barnes who started his own pipe company in Tilshead, Wiltshire, making the Tilshead and James Upshall premium class pipe, which took it's name from the Major's ancestry, one James Archelaus Upshall, an ardent pipe smoker, who loved quality and perfection.

Ever since the company has been making hand turned, straight grained pipes for the smoking connoisseur and has gone from strength to strength gaining fame and the utmost respect as one of the greatest hand made pipe companies.

Pipe expert, Mr. Richard Carlton Hacker, author of "The Ultimate Pipe Book" has stated that, "Barry has an almost uncanny knack of finding the best concentration of grain. His Upshall pipes are so distinctive you can immediately spot them in any pipe rack". It's this grain pattern and quality that collectors prize so highly.

The raw material we use for hand-turning pipes is specially selected naturally dried plateau Briar from Greece. As opposed to the kiln dried ebauchons, our briar guarantees lightweight, and tremendous properties for absorbing heat, as well as tobacco moisture and ensures a sweet smoke. Plateau blocks of considerable age, are of added benefit to the real pipe smoker; a rich mature graining which infrequently result in a perfect straight grain or birds eye pipe.

Each block of plateau briar is an individual piece of nature, which has to be treated and worked accordingly. The turner's art is to transform a well seasoned and naturally dried block into a flawless pipe, which will give its owner years of smoking pleasure due to its perfect smoking characteristics and great beauty.

At James Upshall, no part of the production is trusted to pre-set machines or copy-fraisers. Each pipe is shaped on a single flat bed lathe by chisel and the craftsman's artistic skill. Each James Upshall pipe is the result of perfect briar quality as well as the skill of the hand-turner, no two pipes are identical. Nature and man work together to create the optimal pipe. All models are old English shapes influenced by the hand-turner's creative mind.

James Upshall give a unique guarantee on each pipe leaving the workshop. No pipe bearing the name of James Upshall is marred by fillings and putty. Scarcity of good quality plateau briar and the time consumed turning by hand, limit our production, but we will always strive to fulfill the growing demand for James Upshall, quality and tradition at its best.

As always the James Upshall pipe has been sold in the most prestigious outlets around the world and has been greatly appreciated by royalty, lords and celebrities alike. King Hussein of Jordan, Anwar Sadat, Bing Crosby, Yul Brynner and more recently Arnold Schwarzenegger, Robert Wagner and Tom Selleck to name but a few of the famous names who have helped to cement James Upshalls' reputation as the Rolls Royce of Pipes.

James Upshall pipes are graded by various finishes, i.e. bark, sandblast, black dress and smooth etc. Then by cross grain, flame grain, straight grain and, last but not least, the perfect high grade, which consists of dense straight grain to the bowl and shank. The latter being extremely rare. In addition, the price varies according to group size, i.e. from 3-4-5-6 cm high approximately Extra Large. We also have the Empire Series which are basically the giant size, individually hand crafted pipes which come in all finishes and categories of grain. All our pipes are individually hand carved from the highest quality, naturally dried Greek briar. In order to simplify our grading system, let me divide our pipes into 4 basic categories.

We also offer a selection of finely engineered silver and gold banding for pipes. Bands are available in silver, 9ct and 18ct gold, the width can be 6mm or 10mm and they can be fitted flush or on the surface. Bands are finished in plain, engine turned with barley or line patterns and also in gold with large hallmarks. Army mounts and spigot mounts can only be applied to round stemmed pipes. Please see the shape chart which shows the different shapes available in all group sizes and finishes. Also please look at the size chart to assist in your selection of the right pipe for you.

Scanned images from a pamphlet Ken Barnes sent to Al Jones, who then posted it on PipesMagazine.com