Difference between revisions of "Castello" 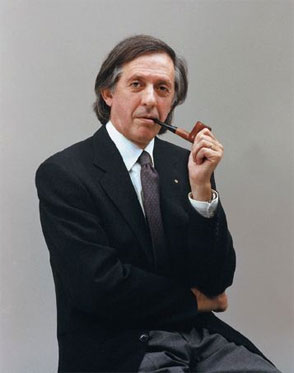 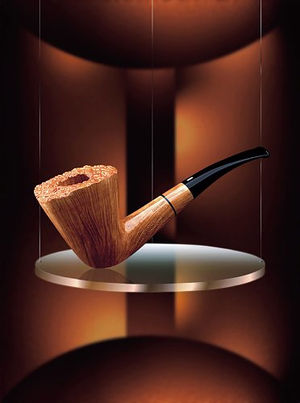 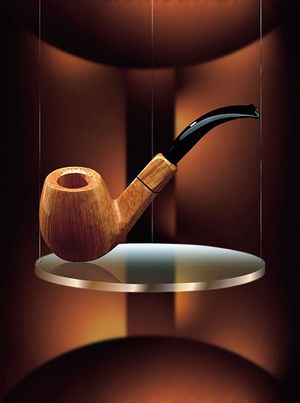 "Pipa Castello" was born in 1947 in the artisan workshop of Carlo Scotti in Via Fossano, in Cantù, with the target to produce pipes which could be placed at the very top of quality and perfection from both the technical and aesthetical side.

"I run a craftsman's shop, not a factory, my pipes are works of art, fruit of expert hands, heart and fantasy" - Carlo Scotti.

So, the Castello Philosophy was born. It prefers to be, not to appear, always looking for a perfection that, in the human limits, Castello tries to reach.

Carlo's work-passion continues unaltered under the faithfull guidance of his daughter Savina and Franco Coppo.

To discover and to know deeply our world, you are invited to surf through the pages of our official website.

An article by Rick Newcombe

This article was originally published in February 2005 in The Pipe Collector, the North American Society of Pipe Collectors (NASPC) newsletter, and is used by permision. Consider joining. It's a great orginazation. 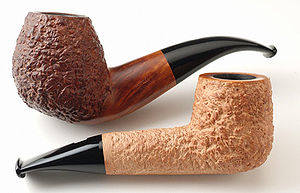 The elusive shape #11 is similarly sized to the #10. Shown is an example in Sea Rock, with a #10 Natural Vergin for comparison. G.L. Pease Collection 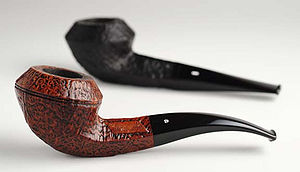 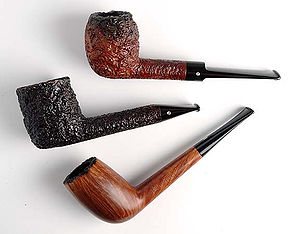 Italy is known for art, beauty, fashion, food, music, literature, architecture, design and a hundred other qualities of culture and civilization. So not surprisingly, some of the best pipes produced today are made in the small factories and workshops scattered throughout the country.

One of the most expensive Italian pipes I ever bought was a beautiful straight-grain calabash made by Ser Jacopo. I paid Bob Hamlin $550 for the pipe, and it will always have a special place in my collection. It is my absolute favorite "Sherlock Holmes pipe." I want to point out that I have bought a handful of pipes, and a closetful of tobacco, from Bob Hamlin over the years, and I have never regretted a single purchase. That is definitely the sign of someone I would recommend doing business with.

There have been several books devoted exclusively to Italian pipes, including Savinelli, Brebbia, Mastro de Paja, Radice, Il Ceppo, Ardor, Amorelli, Don Carlos, and many others--too many, in fact, to mention. But one of the very best names, without question, is Castello. Many American collectors consider Castello the only serious rival to Dunhill when it comes to pipes made in a factory, and I know a good number who regard Castello as the best in the world.

Regardless of where you come down on this debate, I think we can all agree that Castello pipes are high quality. One of the things that appeals most to me about Castello pipes is their opening. Their air holes inside the pipes and mouthpieces are frequently very close to the dimensions that I have written about in the past. My only complaint is that their mouthpieces are a little thick for my taste, so I always have them thinned out--and theirs is an acrylic that I find reasonably comfortable, though my preference is vulcanite.

On a trip to Rome in March, I visited Marco Parascenzo at his store, Novelli. Marco is extremely knowledgeable about pipes, so it is not surprising that Castello entrusts its distribution in the United States to Marco, and he in turn entrusts Bob Hamlin of Virginia with the responsibility of getting Castello pipes to as many American collectors as possible.

Marco has a charismatic smile and a natural friendliness about him. He travels to the United States three times each year--for the Retail Tobacco Dealers Association's annual convention and for the annual pipe shows in Chicago and Richmond. He shook his head and laughed when I suggested that he attend a Los Angeles pipe show. Considering how weary I was feeling after flying across the ocean, I was totally sympathetic. 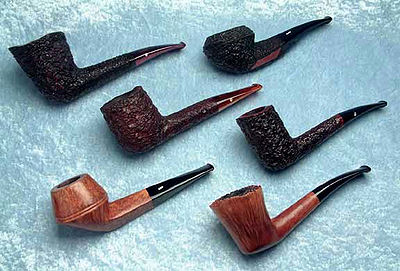 Uppper left: Sea Rock G, shape #34, a classic shape, and one of Carlo Scotti's favorites. Just below: Old Sea Rock KK short Canadian, #33, stamped “Hand Made” and dated to 1969-1970. The Greatline on the lower right is somewhat unusual for its demure stature. G.L. Pease Collection

Marco brought out dozens of beautiful Castello pipes, including some that were made decades ago. He also opened the drawers in a shelf behind the counter, one at a time, and put them on the glass counter top. Each drawer contained about a dozen gorgeous Castellos, and he must have shown me four or five drawers. I was suddenly feeling grateful to the two fanatical American collectors, Chuck Stanion and Ed Lehman, who strongly recommended that I visit Marco on my trip to Italy. I selected a straight grain Collection Fiammata billiard with a plateau top. It is a beautiful pipe, but I really didn't enjoy smoking it because the mouthpiece felt so thick in my mouth.

When I told Marco that I would be in Milan later in the week, he volunteered to call Franco Coppo to arrange for me to visit the Castello factory, which is located in Cantu--a 45-minute drive from downtown Milan. When I arrived at the factory on Friday afternoon, Franco came out to the courtyard to greet me. He was smoking his pipe and appeared to be in a very good mood. I asked if it was OK to smoke in the factory. "OK?! It is mandatory!" he laughed. So I pulled out my newly bought Fiammata and loaded it with some old Dunhill 965. Just after I had lit the pipe, tamped the tobacco, lit it again and really got it going, I couldn't help myself. "This mouthpiece feels too thick between my teeth," I said, hoping not to offend my host. "No problem --we can fix that in five minutes," Franco said, leading me into the spacious factory filled with beautiful blocks of briar on the floor. "They are all around 10 years old," he said.

Franco approached one of the half-dozen artisans, explained the problem, asked me how thick I like it ("around 4 millimeters from top-to-bottom"), and stood next to me as we watched the pipe maker file and sand the mouthpiece. When it was just right for my taste, I re-lit the pipe and now consider it one of my very favorites.

Franco's father-in-law was the legendary Carlo Scotti, who was to Castello pipes what Alfred Dunhill was to Dunhill pipes. I asked where the name Castello, which is Italian for castle, came from. "Carlo Scotti wanted a fantasy name, and castles conjure up fantasy. He also wanted a name that sounded similar in several languages, and the word castello in Italian is chateau in French, castle in English and castillo in Spanish."

Franco takes great pride in his work. He started in the factory, making pipes, and he is still very involved in designing new shapes. But like me, he prefers only slight variations on the classic shapes. "I don't like it when the pipe maker goes crazy with the designs and the pipe can hardly be smoked," he said, adding that tradition is an important part of Castello. For instance, one of his pipe makers has been with the company for 44 years and another for 36 years.

I watched a pipe maker carve a Sea Rock, which is a finish that Castello has made popular, especially because these pipes are so light in weight. The pipe maker used what looked like a small sharp spoon with a wooden handle about the size of a standard screwdriver. Using plenty of elbow grease, he very quickly, and gently, turned out tiny circles of briar wood. After he finished the carving, he brushed the wood briskly, again using elbow grease. "This job takes a lot of muscle," Franco said.

The highlight of my visit came at the end, after we entered a back room that contained a stunning wood-and-glass rack containing some of the most beautiful Castello pipes ever made. These are part of Franco's private collection--the part where all the pipes are unsmoked. A number of different sizes and shapes are featured, including a straight-grain Hawkbill that would have made Chicago collector Chuck Rio drool. ALL of the pipes in this rack are extraordinary, and Franco said that none is for sale. However, he said that collectors can special order similar racks from any Castello dealer in America. I was afraid to ask the price.

Overall, I cannot tell you how impressive the Castello factory is--clean, well organized, efficient, with plenty of machinery, the very best of materials and, most importantly, with a handful of experienced and skilled craftsmen, many smoking Castello pipes as they worked, turning out some of the finest pipes in the world. It is a real tribute to Franco that he has been able to carry on the tradition started by Carlo Scotti and in many ways propel the company forward so that the pipes made in the 21st century are among the best available anywhere in the world.

This article was originally published in February 2005 in The Pipe Collector, the North American Society of Pipe Collectors (NASPC) newsletter, and is used by permision. Consider joining. It's a great orginazation.

Robert C. Hamlin has written an excellent but somewhat dated article on dating Castellos, with additional information on grading and style called the PCCA's Castello Grade and Style Guide