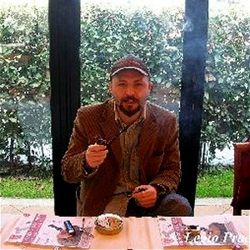 Pipes are my passion, about fifteen years ago, when I began to collect smoking pipes, I would have never thought that one day I would build my own pipes, but two years ago (2007), the curiosity brought me to make the first one. It was a surprize for me when that same day a friend of mine took that brand new pipe for himself. Then I made a second one, and so on.

Now I build about ten pipes per month. Each pipe is unique in shape, dimensions and color, crafted by hand from the aged bare briar block, coming from Calabria or Tuscany, that I personally select in the place. All of my stems are made in volcanite and sometimes in lucite or horn. I tend to realize smooth and polished pieces, but anyway, during the work, some minor impefection may arise on the wood surface: in that case I will rusticate or sandblast.

YY, Z respectively mean the year of production and the years of activity.