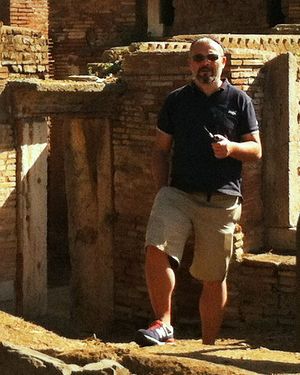 Gian Maria Gamboni among the wonders of the ancient Rome scenario... not even half a mile from his house

Gian Maria Gamboni is an Italian pipe maker who was born in Florence in 1970, though now lives in Rome. Given his immersion in Renaissance art in his youth and memories of his father (a sculptor and pipe smoker whose studio was often visited by other artist/pipe smokers) while in England, it's no surprise Gamboni wanted to make his own mark in the world of finer things. He picked up pipe smoking in the 1990s and has loved it since. After visiting Becker & Musicò in 2007, he made his first pipe (Becker's influence in shaping can clearly be seen in his work).

In 2011 Gamboni began to grade his pipes using golfing terminology, which he further revised in 2013. For smooth pipes, the stamps are "Skins Game" and "Stableford". Sandblasted pipes are stamped "Fairway" or "Putting Green", while "Teeing Ground" is reserved for rusticated pipes. For his best pieces, he stamps "Hole In One", which is, perhaps, a good way to express excitement and rarity of the piece. Each of his stems are hand-cut from vulcanite rod with turned, incorporated tenons.[1]

Pipes are my passion, about fifteen years ago, when I began to collect smoking pipes, I would have never thought that one day I would build my own pipes, but in 2007, the curiosity brought me to make the first one. It was a surprize for me when that same day a friend of mine took that brand new pipe for himself. Then I made a second one, and so on.

Each pipe is unique in shape, dimensions and color, crafted by hand from the aged bare briar block, coming from Liguria or Tuscany, that I personally select in place. All of my stems are made in volcanite starting from the raw rod coming from Germany.I tend to realize smooth and polished pieces, but anyway, during the work, some minor impefection may arise on the wood surface: in that case I will try to blast/rusticate or reserve them for my fireplace.