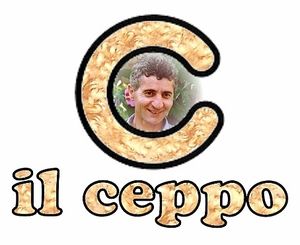 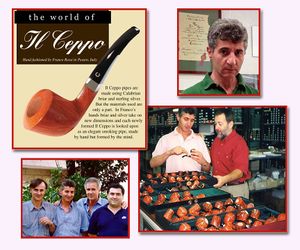 My passion was born casually and it moved me to consider and love the world of artisanship. Casually and overall luckily, I ran across the emblematic person of Franco Rossi, pipemaker and owner of the "Il Ceppo" factory. He gave me the useful key to opening the doors of the fascinating world of pipes.

"Il Ceppo" boasts of thirty years of history with successive and great satisfaction which helped to keep high the name of the Marchigiane factories. The most famous as Pesareses factories have always had reciprocal respect and admiration and this have and will take cooperations and sharing of their own art, to confirm the distinctive seriousness and high quality. 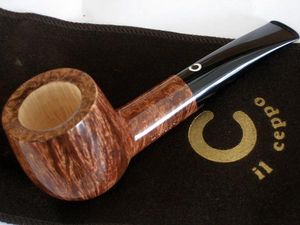 Process is completely handmade except for some passages made with the aid of machines to obtain perfect results. The briar used to make the pipes has been left resting and seasoning for at least two years before the sapient hands of the pipemakers could start their work. Our working politic is centred on the care for details, to obtain the best product as possible.

Our prices keep a high balance with the quality of the offered product; they reflect totally our careful and eager work. We've never forgotten that what we make could only be obtained if moved by an unconditional love for this work of the good old days.

(Editor's note: I have tried to correct most grammar & spelling, but in some instances I do not have the vaguest clue what the author is trying to say) 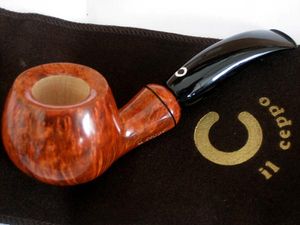 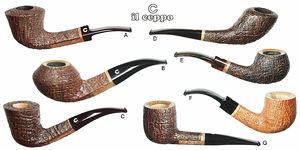 The IL CEPPO brand has been in production since the late 1970's but, in spite of its overall good value, is not well known in all parts of the United States. Partly this is because of a limited supply of pipes and partly because the brand has not been put in front of the pipe smoking public through a national venue.

The Il Ceppo brand is made in Pesaro, Italy and is part of the famous Pesaro school of design that has also produced Mastro de Paja and Ser Jacopo. That all three brands have similar characteristics can be seen at a glance, but they all have significant differences as well.

Giorgio Imperatori, an architect, had a passion for pipes, and in 1978 began to design and make Il Ceppo. Always considered a good value and very good for smoking, the brand did not make folks stop and take notice until 1995 when Franco Rossi joined the firm. He brought with him a true elegance of design and a unique flair that now helps Il Ceppo stand apart. Giorgio has retired to his farmhouse, and the pipes are now all made by Franco and his sister Nadia. 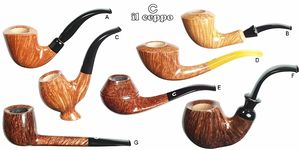 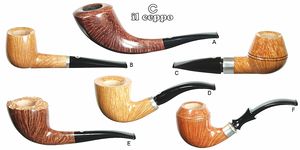 Individuals involved in the creation and continuation of the Il Ceppo brand are; Giorgio Imperatori (now retired from pipe making); Franco Rossi who, along with his sister Nadia, are the current Il Ceppo pipe makers; Mario Lubinski, the distributor of the Il Ceppo brand in Italy; Massimo Palazzi who worked with Il Ceppo until 1998 when he founded his own brand, L'Anatra.

A word about Mario Lubinski, if I may. I have known Mario for twenty years or so, from the time he was one of a number of small distributors of pipes and smokers' accessories in Italy. Since that time Mario has become the largest such distributor in Italy and one of the largest in Europe. Why? A number of reasons, really, but I'll mention just one here - expertise. Many in our small industry are known as experts, but real expertise is very rare indeed. Mario is a true expert regarding everything to do with pipe making, although he would never say so himself. A few of Mario's credits? This man knows briar better than anyone with whom I have ever spoken, having dealt with all the briar sawmills throughout Italy over a period of thirty years. As both a designer and sourcer (one who can find the source) of quality products there is again no one better. Perhaps one would not think that a distributor has a hand in pipe design, but Mario helped design the Original Sherlock Holmes Series of pipes for Peterson, plus the original (closed) Sherlock Holmes pipe rack. I feel sure that those among you who smoke cigars have seen the Romeo & Julieta cigar cases - designed and made by Mario. My reason for writing this? To pay homage to a real expert in an area where many are faux.

An excellent selection of Il Ceppo pipes is available at Pipedia Underwriter, lepipe.it